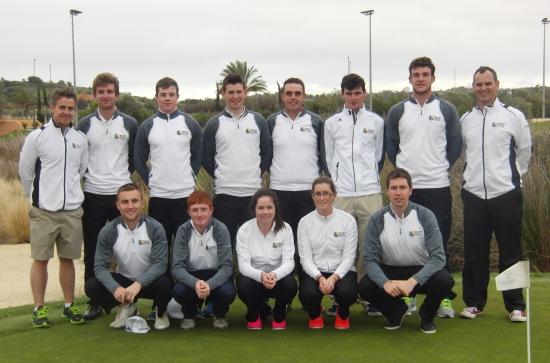 Maynooth University A & B golf teams will compete today for a place in the quarter finals of the Irish Colleges Match Play Championship. Both teams received  a walk over in round one back in Novermber (MU A w/o IT Blanchardstown) & (MU B w/o IT Sligo). Maynooth A team are up against Cork IT away at Thurles Golf Club while the Maynooth B team take on NUI Galway at home in Carton House.

Maynooth A are determined to go all the way this year having finished runner-up in the championship in 2013 & 2014. Maynooth B are the current holders of the Irish Colleges Plate Match Play and are hoping to contend in the premier championship event this year.

A specific mention to B team player's Kieran Lynch and Eoghan O'Donovan who both fought back late in their matches to steal a point for the B team. Fomer Irish Boys (U18) International Lynch, won three of his last four holes which included birdies on the 16th & 17th holes to get the match to extra holes. He finally edged out his opponent with a par on the 20th. Similarly, co-captain O'Donovan clinched his match by winning four of his last five holes to become the eventual winner by a one hole on the 18th.

Both teams will now advance to the Irish Colleges Match Play finals which will take place in Woodbrook Golf Club, Co. Wicklow on March 12th & 13th.