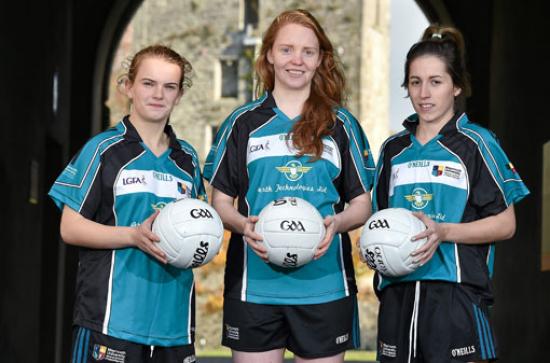 The hosts got off to a dream start with a goal straight from the throw-in, Alison Taylor racing onto a pass and blasting the ball to the net serving warning of their intent immediately.

Katie O’Dea, Jennifer Barry with a brace and Megan O’Connell all raised the white flag before Kerry star O’Connell drove a penalty beyond the reach of Ciara Trant to give UCC a resounding lead.

It took Maynooth fifteen minutes to breach the Cork defence but eventually Mikaela McKenna found the target. The Kildare forward was then unlucky to hit a wonderful chance just wide of the post as she was rounded Clodagh Walsh, but unfortunately was off balance as she shot. UCC took advantage immediately as Taylor finished wonderfully at the opposite end with a low shot across the face of Trant’s goal into the corner of the net.

Two points from the tireless Roisin Byrne kept the scoreboard ticking over from a Maynooth perspective but O’Connell, Barry- one of a number of Cork’s All Ireland winning side on the UCC side - and Áine O’Sullivan added to the Munster teams advantage and they took a 3-12 to 0-3 lead into the interval.

Facing a Division One side for the first time, Maynooth had taken a while to acclimatise to the pace of the Cork onslaught but the second half was a different matter as they took the game to their illustrious opponents.

A couple of early points for UCC were answered by a Byrne free and with the lively Ciara McGuigan causing trouble for the host’s backline, Aoife Duffy was able to ghost through and strike for Maynooth’s opening goal moments after entering the fray.

With the Maynooth defence beginning to get to grips with the tricky UCC attack, allied to some excellent goalkeeping from Dublin’s Ciara Trant, the second half was a much more even affair. Eadaoin Connolly grabbed a second goal for the visitors and she was desperately unlucky to see another effort smash back off the underside of the crossbar minutes later.

Aoibhinn Kiernan blazed a free over the bar late on for Maynooth, but O’Connell was to have the final say with a point in injury time to rubber stamp her display and victory for a star studded UCC.

Maynooth University will face NUIG in the next round at home on February 26th. NUIG overcame Mary I in their first round clash 0-12 to 0-7.