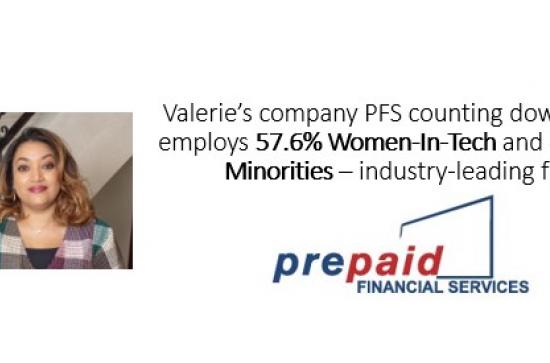 About the Event
We are delighted to announce that the next event in the School of Business’ Industry Speaker Series will be a talk from the highly accomplished and celebrated Valerie Moran from Prepaid Financial Services (PFS).

Valerie is Head of Operations & Client Relations at PFS and was listed amongst the Top 10 UK Women Entrepreneurs, 2019. From Forbes to CNN, BBC to live in studio with Sky News and a feature in OK Magazine, Valerie’s achievements have captured the imagination.

Join us to hear from Valerie about:

All are welcome to attend but we ask that you please RSVP to business@mu.ie to secure your place.

Valerie Moran is the wealthiest black female in the UK – The Sunday Times Rich List 2019. Valerie, who has been described by a reader of The Financial Times as the "UK’s Oprah," is the only black female ever to enter the list in the 31-edition history of the publication. From Forbes to CNN, BBC to live in studio with Sky News and a feature in OK Magazine, her Diversity and Inclusion story has captured the imagination.

Valerie brings a refreshing air of tenacity to the worlds of FinTech and philanthropy. Now, Head of Operations & Client Relations at PFS, she held the honour of being Employee No.1 in 2008 as the company's Implementation Project Manager. Over the years, her analytical mind and suave management style have helped to put the company on the global Regulated Financial Services map. Valerie and her husband Noel are one of the world's most successful couples in Financial Technology. Their company has now returned profits for 11 consecutive years and is eyeing an IPO in 2019. She oversaw the donation of the equivalent of 200,000 school meals to hungry children in Mali in West Africa with PFS, Mastercard and the United Nations World Food Programme (WFP). No doubt, the story of her legacy is only beginning.

Valerie was born in Zimbabwe to a family of 5 children. Her mother was a Beautician and her father ran several of his own businesses simultaneously - butcher, bakery, school uniform factory, and property investments. Growing up, her father worked extremely hard and this same work ethic has remained with his daughter.

After school, she dreamed of working in the medical field as a Nurse or a Radiographer. However, it was not to be as her parents discouraged these career paths and saw them as futile for several reasons. Valerie went on to attend college and studied COBOL/Fortran/C (programming language) and other related Programming Courses. She progressed to become a talented Systems Analyst.

Her parents greatly influenced her life, especially her mother. At home, schooling was promoted and the importance of how education gives independence and hard work leading to success. Valerie comes from a family where her aunts and uncles were highly educated and were Professors and Deans at universities. Just like them, she always wanted to emulate and aspire to be successful one day in her own career path.

She admires people who have enjoyed phenomenal success and have given back to their communities. Someday, she would absolutely love to meet Richard Branson and Bill Gates. The sheer intelligence and mastermind behind what both men created intrigues her.

Her favourite Writer is Agatha Christie. To Valerie, she is timeless and had a prodigious imagination. Valerie's husband Noel bought her the entire book collection one Christmas. It remains one of her most treasured gifts.