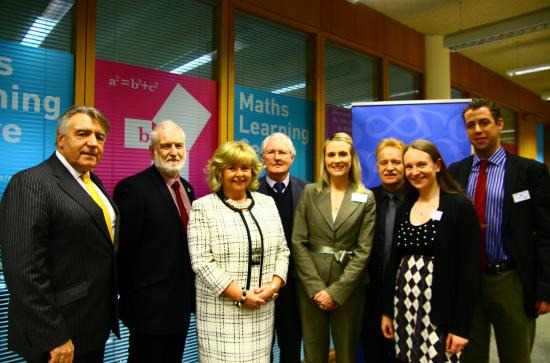 Senator Mary Moran (Labour Party spokesperson on Education, Disability, Equality & Mental Health), officially launched the Student Evaluation of Mathematics Learning Support: insights from a large multi-institutional survey report in DCU on Friday 21st November. She said: "'I am delighted to launch the report, I found it fascinating and the confidence that MLS gives to students is very important." Senator Moran added that two of her children had regularly availed of Maths Learning Support in Maynooth University & NUIG. They told her that they found the support that they received was invaluable.

The report was on an extensive student survey conducted by the Irish Mathematics Learning Support Network (IMLSN). This evaluation is the first of its kind to be undertaken on such a scale in Ireland, it involved responses from over 1,600 first-year students across nine Higher Education Institutions from, including Maynooth University. This report contains valuable insights about the transition from second to third level mathematics for students across a range of disciplines, as well as detailing the impact that they perceive that mathematics support services have upon their ability to cope with this challenge.

At the launch, Professor Duncan Lawson (sigma, and Newman University, Birmingham) stated 'This report is a hugely significant piece of work, a whole nation study which is unique in its extent. It is of huge value, certainly in Ireland but also internationally. It is evidence based and should be seriously considered by practitioners of Mathematics Learning Support (MLS), policy makers and senior managers within HEIs'. Professor John O'Donoghue (UL and the NCE-MSTL) stated that 'I expect that this report will become a seminal report for Maths Learning Support'.

The IMLSN is a network of practitioners of MLS in Ireland who collaborate and share resources to ensure best practice in the provision of MLS.  For further information, please contact one of the authors: Dr Ciarán Mac an Bhaird, Maynooth University Department of Mathematics and Statistics, Ciarán O'Sullivan (IT Tallaght), Dr. Olivia Fitzmaurice (UL) and Dr. Eabhnat Ní Floinn (DCU).

The report and the presentations from the launch are available on the IMSLN website: http://supportcentre.maths.nuim.ie/mathsnetwork/IMLSNReportLaunch