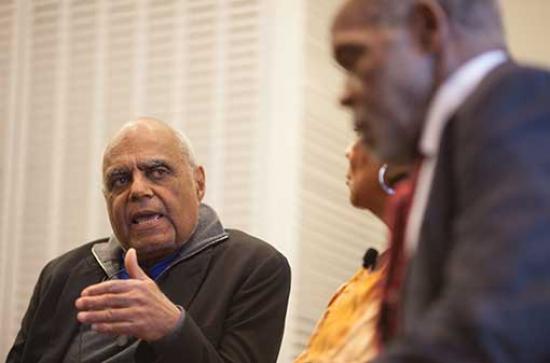 Access to mathematics and science is now as relevant as access to reading and writing, according to Dr Bob Moses, the iconic civil rights activist and founder of the Algebra Project, a US non-profit organisation dedicated to improving the mathematical achievement of historically under-represented students and communities.

Dr Moses delivered the comments at a public lecture at Maynooth University, as part of a week-long visit organised by the NCCA (National Council for Curriculum Assessment).

“At the Algebra Project we believe that mathematical literacy is a civil right and recognise that 21st century mathematical skills are important, not only for gaining access to college courses, but for full participation in the economic life of modern society,” Dr Moses said.

Internationally, there is concern about the low level of mathematical skills of students emerging from second-level and, in particular, of those proceeding to third-level education. These uneven and inadequate mathematical skills affect not only the individual’s development and career prospects, but also have more general implications for society. The Algebra Project is a US-based initiative, tackles this issue head-on, working with students from schools representing the lowest quartile of academic achievement, social and economic status.

Throughout the coming week, the Algebra Project team will introduce Irish primary and post-primary teachers and students to their curriculum and pedagogies at Maynooth University.

“It is culturally acceptable in Ireland to say you’re not good at mathematics, and one of the aims of the Project Maths initiative is to improve students’ attitude towards mathematics and their belief that they can do mathematics. The Algebra Project has spent a lot of time figuring out what to teach and how to teach it so that students are willing to engage in mathematics.” said John Hammond, NCCA Chief Executive.

Professor Philip Nolan, President of Maynooth University, speaking ahead of the lecture said, “We are honoured to host Dr Moses in Maynooth. A prominent figure in the 1960s Civil Rights Movement, his contribution to the freedom struggle in America was described by Martin Luther King as an ‘‘inspiration.’’ Today, his effort to continue to address civil rights inequities by focusing on the potential of education, particularly maths education, to change the course of an individual’s life is a true of example of how Dr Moses continues to inspire.”

A graduate of Hamilton College and Harvard University, Bob Moses was a prominent figure in the Civil Rights Movement as a field secretary for the Student Non-Violent Coordinating Committee (SNCC). Dr Moses is the recipient of a MacArthur Foundation Fellowship (1982-87), and subsequently started the Algebra Project, which uses mathematics as an organizing tool for a Quality Education as a Constitutional Right (QECR) for all students. With the support of the National Science Foundation since 2002, the Algebra Project has worked with cohorts of high school students who previously performed in the lowest quartile on standardized exams. This work has led the Algebra Project to propose a math high school “benchmark” for bottom quartile students: that they graduate high school on time, in four years, ready to do college mathematics for college credit.