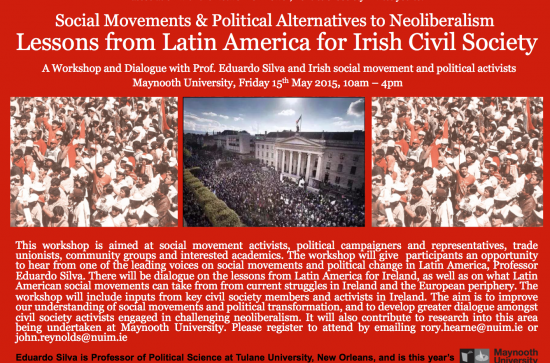 Workshop organised by the Research Cluster on Social Justice, Participation & Human Rights, in association with the Network on Power, Politics & Society, the Maynooth University Department of Law and the Department of Geography.

This workshop is aimed at social movement activists, political campaigners and representatives, trade unionists, community groups and interested academics. The workshop will give  participants an opportunity to hear from one of the leading voices on social movements and political change in Latin America, Professor Eduardo Silva. There will be dialogue on the lessons from Latin America for Ireland, as well as on what Latin American social movements can take from from current struggles in Ireland and the European periphery. The workshop will include inputs from key civil society members and activists in Ireland. The aim is to improve our understanding of social movements and political transformation, and to develop greater dialogue amongst civil society activists engaged in challenging neoliberalism. It will also contribute to research into this area being undertaken at Maynooth University. 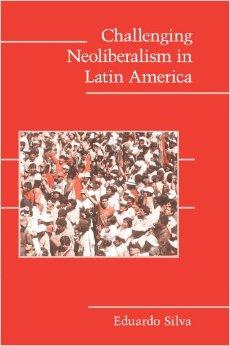 The workshop aims to provide an open space for activists to talk freely and discuss ideas, tactics and strategy, with a spirit of respect for diversity of opinion.

Please feel free to circulate this invitation to those in your networks who may be interested in participating.