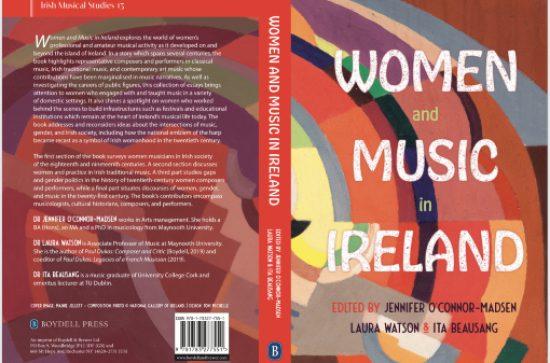 The Department of Music is delighted to announce the publication of Women and Music in Ireland, edited by Dr Laura Watson, Dr Jennifer O'Connor-Madsen and Dr Ita Beausang. The first study of its kind, the book is published by the Boydell Press as part of its series 'Irish Musical Studies'.

Women and Music in Ireland explores the world of women’s professional and amateur musical activity as it developed on and beyond the island of Ireland. In a story which spans several centuries, the book highlights representative composers and performers in classical music, Irish traditional music, and contemporary art music whose contributions have been marginalised in music narratives. As well as investigating the careers of public figures, this collection of essays brings attention to women who engaged with and taught music in a variety of domestic settings. It also shines a spotlight on women who worked behind the scenes to build infrastructures such as festivals and educational institutions which remain at the heart of Ireland’s musical life today. The book addresses and reconsiders ideas about the intersections of music, gender, and Irish society, including how the national emblem of the harp became recast as a symbol of Irish womanhood in the twentieth century.

The first section of the book surveys women musicians in Irish society of the eighteenth and nineteenth centuries. A second section discusses women and practice in Irish traditional music. A third part studies gaps and gender politics in the history of twentieth-century women composers and performers, while a final part situates discourses of women, gender, and music in the twenty-first century. The book’s contributors encompass musicologists, cultural historians, composers, and performers.

DR JENNIFER O’CONNOR-MADSEN works in arts management. She holds a BA (Hons), an MA and a PhD in musicology from Maynooth University.

DR LAURA WATSON is Associate Professor of Music at Maynooth University. She is the author of Paul Dukas: Composer and Critic (Boydell, 2019) and coeditor of Paul Dukas: Legacies of a French Musician (2019).

For further details, and to pre-order copies, access this link: https://boydellandbrewer.com/9781783277551/women-and-music-in-ireland/