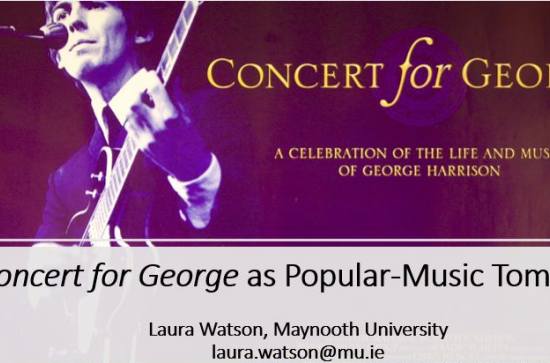 On 29 November 2002, a ‘Concert for George’ at the Royal Albert Hall, London marked the first anniversary of George Harrison’s death. As a tribute to the late musician, it was dominated by performances of his catalogue by friends and collaborators such as Paul McCartney, Eric Clapton, Ravi Shankar, his son Dhani Harrison, and others. In addition to this musical retrospective, Ravi and Anoushka Shankar premiered a new work at the event, while extra-musical acts featured too. Profits from the event went to charity. In its title, philanthropic mission, and roll-call of famous musicians, the ‘Concert for George’ itself echoed the ‘Concert for Bangladesh’ Harrison had organised in New York in 1971.In this paper, I theorise the ‘Concert for George’ as a type of popular-music tombeau. The tombeau tradition of composing in homage to a deceased individual originated centuries earlier; it experienced a revival and expanded to work in tandem with other remembrance practices in twentieth-century art music. The creativity inherent in the tombeau means it has a function that transcends nostalgia: it is equally imbued with the spirit of renewal. Conceptualising the 2002 concert in the expanded twentieth-century tombeau framework, I discuss how it engaged with themes of mentorship, legacy, and artistic collaboration. Positing this event as a dual act of commemoration and creative rebirth, I argue that it is significant for how we understand popular-music history today.