Dr Joe Davies has been awarded a Marie Sklodowska-Curie Global Fellowship from the European Commission. 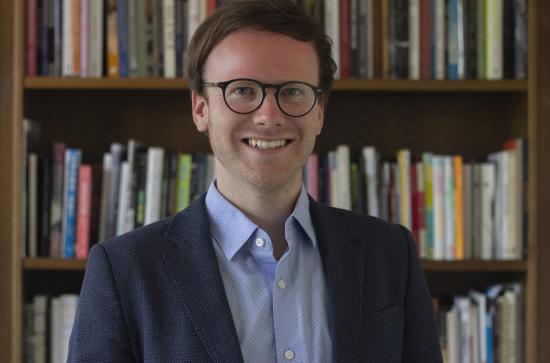 We are delighted to announce that Dr Joe Davies has been awarded a Marie Sklodowska-Curie Global Fellowship from the European Commission. He will be jointly affiliated with Maynooth University and the University of California Irvine (2021–2024).

Dr Davies’s project, ‘Rethinking Widowhood: Women, Loss, and Liberation in Nineteenth-Century Musical Culture’, centres on women’s experience of widowhood in musical cultures of the long nineteenth century (c. 1800–1914). While there is a growing body of scholarship on widowhood in the fields of literary studies and cultural history, musicological consideration of this topic has tended to be limited to passing reference amid biographical or documentary work. Dr Davies’s research will address this lacuna in two particular respects: first, by rethinking the ways in which widowhood served as a catalyst for musical and artistic creativity; and secondly, by reconsidering the reception and legacy of widows whose contributions have long been overshadowed by the men in their lives. In doing so, the project will take widowhood as an impetus for developing a new kind of historiography that restores women’s individual agency and artistic integrity to the discourse on nineteenth-century music.

The project takes inspiration from the history of emotions, a burgeoning subfield of research that views feelings not as fixed and universal, but as socially and culturally contingent phenomena that vary across time and place. The innovation of this area of study stems from the way in which it historicizes selfhood through placing cultural history in dialogue with anthropology, psychology, sociology, and the medical humanities.

Introducing this interdisciplinary framework into the field of musicology, Dr Davies’s research will establish a new vocabulary for understanding the emotional complexities of widowhood, particularly in terms of what it meant, and how it felt, to be a widow during the long nineteenth century. At the heart of the project will be an emphasis on the ways in which women in this period negotiated – both emotionally and creatively – the boundaries between loss and liberation as they redefined their image in the wake of their husband’s death.

Central research questions include: how might we contextualize the intersections between loss, memory, and renewal in the experience of widowhood? To what extent did personal interaction and different genres of life writing (diaries, letters, memoirs) influence how women such as Clara Schumann, Cosima Wagner, and Amy Beach conceived of widowhood? What were the implications for their social and legal status? And in what ways did these widows cultivate artistic agency through their corporeal and intellectual engagement with music – whether in terms of composition, performance, or the curation of their husband’s legacies? In addressing these questions, the project will not only open up fresh ways of historicising women’s self-fashioning within the musical sphere, but will also provide a model for future research on widowhood and female creativity across a range of art forms.

At Maynooth and UCI, as part of the project’s dissemination activities, Dr Davies will inaugurate an interdisciplinary research network, ‘Women in Music: Global Perspectives’. Bringing together an international cohort of scholars and practitioners from the UK, Canada, Ireland, and the USA, this initiative will serve as a platform for hosting conferences, guest lectures and workshops, together with a recital series of music by women composers. Through these activities, which will be geared towards a wide audience, the network will offer valuable opportunities to start new dialogues about women’s musical contributions across a range of geographical contexts, and to hear performances of music that has long been neglected.

‘It is an honour to be continuing my connection with the scholarly community at Maynooth as a Marie Sklodowska-Curie Global Fellow. Warm thanks are extended to staff at Maynooth for their support throughout the application process, particularly Professor Lorraine Byrne Bodley and Patrick Boyle. I much look forward to collaborating with colleagues and students in the Music Department in the coming years, and to immersing myself in the rich culture of musicology in Ireland more generally.’

Joe Davies completed his DPhil in Music at the University of Oxford, with a full scholarship from the British Arts and Humanities Research Council. At present he holds an Irish Research Council Postdoctoral Fellowship in the Music Department at Maynooth, together with a Lectureship in Music at Lady Margaret Hall, Oxford.

Dr Davies specializes in the aesthetics and cultural history of nineteenth-century music, particularly that of German-speaking lands. What motivates his research is a curiosity about the relationships between music and its aesthetic, social, and cultural contexts. These interests come together in his first monograph, Schubert and the Gothic (forthcoming with Boydell & Brewer). Taking its cue from the expressive worlds of Schubert’s early Schauerballaden, this study traces the sound of the gothic in contexts that range from the fantastical and the uncanny, to the sublime and the grotesque. It does so through a multidisciplinary and multisensory methodology, whereby gothic tropes in Schubert’s songs and instrumental music are studied in relation to those in literary and visual works by such figures as Ann Radcliffe, Friedrich Schiller, E.T.A. Hoffmann, and Henry Fuseli. This approach is designed not only to deepen our understanding of Schubert’s artistic vision, but also to establish new ways of thinking about the relationship between music and other art forms in nineteenth-century culture.

Alongside this project Dr Davies is leading a number of international collaborations that emerge from and feed valuably into his research and teaching. Among these is Clara Schumann Studies, a collection of essays that he is editing for Cambridge University Press’s ‘Composer Studies’ series (forthcoming in 2021). This book – the first in the series to address a woman composer – brings together the work of leading scholars from the UK, Canada, and the USA with the aim of developing new analytical and critical approaches to Schumann’s music, and of reappraising her legacy as a performer and teacher. His other collaborative projects include co-editing (with Roe-Min Kok) Clara and Robert Schumann in Context for Cambridge University Press’s ‘Composers in Context’ series; and guest-editing (with Nicole Grimes) a special issue of Nineteenth-Century Music Review, entitled ‘Clara Schumann’s Legacies’.