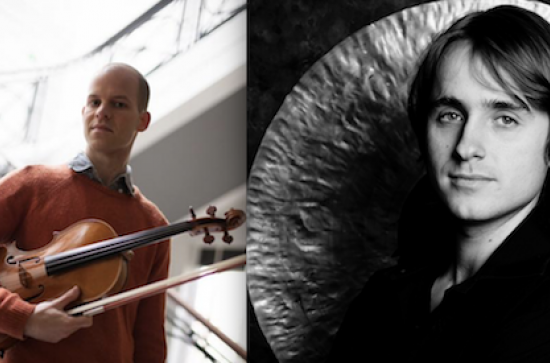 A native of the USA, Nathan Sherman lives in Dublin, Ireland where he enjoys a versatile career as a violist. He studied at the Royal Irish Academy of Music, Royal Academy of Music and the Escuela Superior de Musica Catalunya where he received First Class Honours. He is equally at home performing historically informed music, contemporary and chamber music. He performs regularly with the period ensembles Irish Baroque Orchestra, Ensemble Marsyas and Camerata Killkenny, and contemporary groups Evlana, Crash Ensemble and Kirkos. He is in demand as a chamber and orchestral musician, and is Artistic Director of Ficino Ensemble. He plays regularly with Camerata Ireland, the RTE Orchestras, Ulster Orchestra, European Union Chamber Orchestra, and for several years was a member of the European Union Youth Orchestra. He is especially interested in contemporary music, and premiered Ian Wilson’s Apparitions in Dublin and New York, and recently premiered a solo work for viola by Kevin O’Connell. In 2018 he will give the Irish premiere of Thomas Ades’ Four Quarters with Ficino Ensemble, who will also record a new commission by Garrett Sholdice. Nathan plays a fine viola made by Joseph Curtin and a bow made by Gary Leahy.

An Irish musician of Romanian origin, Alexander Petcu is quickly establishing himself both nationally and internationally as a percussionist of the finest calibre. His debut album, "Alex Petcu: In Time" has recently been released on the RTE lyric fm label and showcases both seminal works and new contributions to the percussion repertoire.
Alex performs in a wide variety of settings with a multitude of orchestras, ensembles and groups, however, his main specialty lies in solo and chamber music. As a soloist, recent appearances include performances at the West Cork Chamber Music Festival, Kilruddery House and National Concert Hall to name a few. He has performed as a soloist with both RTE orchestras and the Irish Chamber Orchestra, and had successes in major national and international competitions such as the Irish Freemasons Young Musician of the Year, Tromp and A.R.D. International competitions.
Alex regularly collaborates with composers and enjoys being involved in the creation of new music. Examples of recent projects include "Beats, Bells and Bridges" and the Abbey Theatre's production of Shakespeare's Twelfth Night, both collaborations with composer Tom Lane, "A Most Peculiar Wintry Thing", a children's show jointly commissioned by The Ark and Music Network with music composed by Brian Irvine and "Invitation to a Journey", a dance/theatre/music collaboration with music by Deirdre Gribbin. He is a regular performer with the Crash and Hard Rain ensembles, two of Ireland's main contemporary groups, and is a founding member of the Bangers and Crash Percussion Group, a new exciting percussion ensemble.
Alex also enjoys performing in an orchestral setting and is a regular extra player for the various professional ensembles in Ireland such as the RTE Symphony, RTE Concert, Irish Chamber, Irish Baroque and Ulster orchestras.
Aside from his performing activities, he is also a keen teacher and has given lecture recitals at Ireland's universities, taught at the CIT Cork School of Music, given workshops for West Cork Music's "Tuning Up" outreach scheme and more. He also holds an MA in music performance from the CIT Cork School of Music, an MSc and BSc in Physics from University College Cork and is currently studying for a doctorate at the Royal Irish Academy of Music.