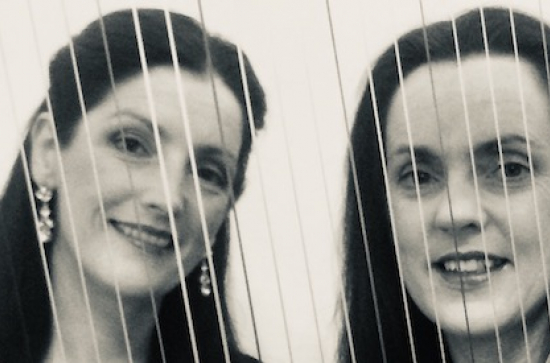 Please join us on the MU Music YouTube channel on Thursday 6th May at 1:15 p.m. to hear this exciting duo.

Teresa and Mary Louise O’Donnell are harpists and musicologists who have performed extensively throughout Ireland, Europe, Africa and Asia, and have appeared on BBC, RTÉ, CNN and NHK (Japan). They began their harp studies with the late Sr. Eugene McCabe at Mount Sackville School, Dublin and later studied with the renowned French harpist Sebastien Lipman, and attended masterclasses with Professor Witsenberg and Han Ann Liu. Teresa has performed with the Irish Chamber Orchestra, Andrea Bocelli, Sinead O' Connor, The Chieftains, The Celtic Tenors, Tommy Fleming and Katherine Jenkins. She holds a doctorate from DCU and was awarded a Foras Feasa fellowship to research a PhD, 'The Music Association of Ireland: A Cultural and Social History’. In 2017, Teresa co-authored Sisters of the Revolutionaries: The Story of Margaret and Mary Brigid Pearse (Merrion Press). Mary Louise holds a doctorate from the University of Limerick and is a former Irish Research Council postgraduate scholar and postdoctoral fellow. She has been a recipient of several awards, including a Fulbright scholarship and Centre Culturel Irlandais bursary. Her first book, Ireland's Harp: the Shaping of Irish Identity c.1770 to 1880 was published by UCD Press in 2014. She has also published widely on topics relating to Irish cultural history, semiotics, and performance studies. Both ladies enjoy busy performing careers and are both Musicians-in-Residence with Fingal County Council. They have just completed the recording of an album of music for the Irish harp by Brian Boydell entitled, Heavenly Harps, Heavenly Cloths.