What will I do in First Year History? 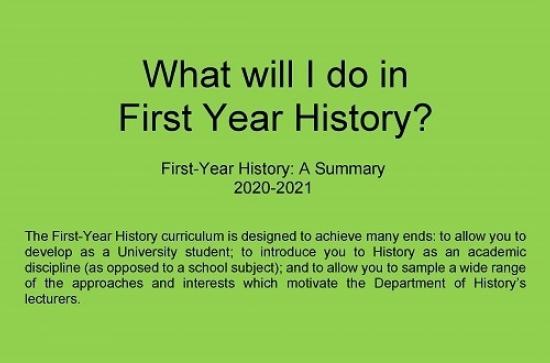 The First-Year History curriculum is designed to achieve many ends: to allow you to develop as a University student; to introduce you to History as an academic discipline (as opposed to a school subject); and to allow you to sample a wide range of the approaches and interests which motivate the Department of History’s lecturers.

You can take 15, 22.5 or 30 credits of History in First Year. There are two core (obligatory) modules, one in each semester. These are:

These two modules are worth 7.5 credits each and consist of two weekly lectures and a tutorial – a practical session which focuses on the acquisition of the skills you will need both as a university student and a historian. Both modules involve a mix of continuous assessment (written assignments and essays) and a written examination at the end of the semester.

HY 122, in the First Semester, will examine to concept of Empire from the ‘discovery’ of America in 1492 to the return of Hong Kong to China in 1997. This broad-ranging module provides an opportunity to explore the ways in which the rise and fall of the European empires has helped to shape the world we inhabit today. Looking beyond national boundaries, the module will encourage you to think globally about history and to appreciate the deep historical roots of the global interconnections considered as characteristic of the modern world.

HY 121, as the name suggests, will introduce you to medieval Europe, with a specific focus on Ireland and the interplay between Irish, Vikings and Normans. The choice of the medieval period in your first year in University is a deliberate one. The module is designed to allow you to approach the academic discipline of History – as distinct from the school subject of the same name – on completely new ground.

In addition, the Department highly recommends that you take two further modules, one in each Semester. These are

In these modules – again worth 7.5 credits each – you will be introduced to different historical approaches (how historians view the past and what questions historians ask about it) and the sources historians use to reconstruct the past. These modules will allow you as well to meet and work with a large number of our lecturers. Each module is divided into three separate strands, each under the responsibility of an individual lecturer. They are assessed by a combination of essays, take-home tests and exams.

In HY 131, Dr Fitzgerald’s strand, History and its Images: Art as Historical Evidence, considers how physical artworks were and are used to manufacture identities, disseminate propaganda, destroy reputations and eulogise or discredit political regimes. Prof. Ribeiro de Meneses’ strand, entitled Fascist Lives: Biography, Autobiography, Hagiography, examines how Mussolini, Hitler and Franco used autobiographical writings to create an image of themselves, and how this image was then replicated in their respective regime’s propaganda machine – and, sometimes, by professional historians. Finally, Dr Newman’s strand, Trials of the Century: The Search for Justice in Europe’s Twentieth Century, explores political trials, focusing on the people accused and the charges brought against them. It asks if there is such a thing as justice in History, and if this kind of trial serves such a high ideal.

HY 132 will follow a similar approach, with three different historical issues being explored through the prism of original documentation. Prof Dooley’s strand examines what it means to be a patriot, tracing the development of many shades of patriotism in Ireland from the Act of Union of 1800 to independence in 1922 while focusing on major political figures including Daniel O’Connell, Michael Davitt, Charles Stewart Parnell, Lady Gregory, Pádraig Pearse, Michael Collins and Edward Carson who shaped nineteenth- and early twentieth-century Ireland. Dr FitzGerald’s lectures explore the theme of patriotism in the context of visual art, following the lead of historians like Peter Burke who argue persuasively that images and artworks can enable us to understand the past more vividly.  Dr Roddy’s lectures will investigate how ideas of the nation and patriotic sentiment manifested themselves and spread among ‘ordinary people’ in nineteenth- and twentieth-century Ireland. She will focus on diverse groups including secret societies, the diaspora, members of religious organisations and non-combatants during the Irish revolution.


If you have any questions about the curriculum please email history.department@mu.ie

I look forward to seeing you in our classrooms!