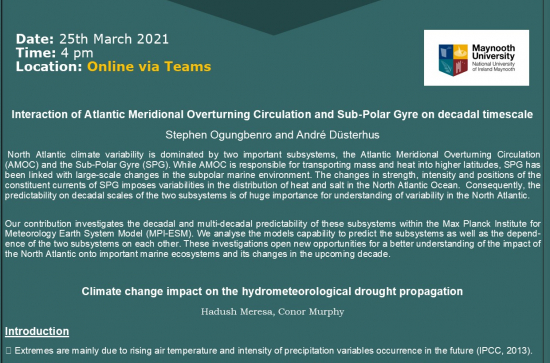 Join us on TEAMS

North Atlantic climate variability is dominated by two important subsystems, the Atlantic Meridional Overturning Circulation (AMOC) and the Sub-Polar Gyre (SPG). While AMOC is responsible for transporting mass and heat into higher latitudes, SPG has been linked with large-scale changes in the subpolar marine environment. The changes in strength, intensity and positions of the constituent currents of SPG imposes variabilities in the distribution of heat and salt in the North Atlantic Ocean.  Consequently, the predictability on decadal scales of the two subsystems is of huge importance for understanding of variability in the North Atlantic.

Our contribution investigates the decadal and multi-decadal predictability of these subsystems within the Max Planck Institute for Meteorology Earth System Model (MPI-ESM). We analyse the models capability to predict the subsystems as well as the dependence of the two subsystems on each other. These investigations open new opportunities for a better understanding of the impact of the North Atlantic onto important marine ecosystems and its changes in the upcoming decade.

Introduction
❖ Extremes are mainly due to rising air temperature and intensity of precipitation variables occurrence in the future (IPCC, 2013).
❖ Drought is one of the natural hazards that most likely to occur due to the effect of climate change. Drought has an impact on economic, social activities, ecosystem, and water resource development (IPCC, 2014).
❖ Drought is predominantly caused by lack of soil moisture, streamflow and precipitation, other factors, like prolonged abstraction and excess evapotranspiration, are largely involved in drought incidence and propagations. These are linked to hydrometeorological drought through streamflow, precipitation, overland flow, soil moisture, groundwater discharge, and evapotranspiration, which are controlled by the hydrological cycle components (Lin et al., 2014; Amin et al., 2014).
❖ Therefore, evaluation of hydrometeorological drought propagation and its relationship among the indices under climate change is required.
Geography - Postdoc Seminar Poster