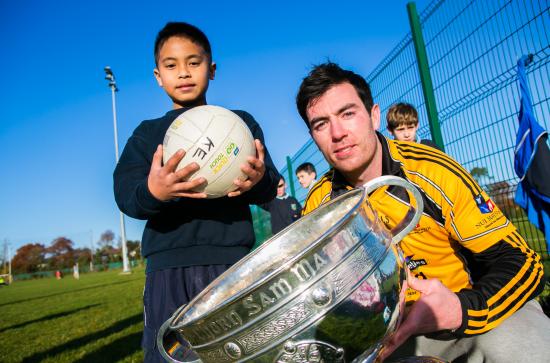 As part of Community Engagement Week, students are conducting activities ranging from a GAA blitz, hosted by the University’s GAA Scholars and attended by over 300 children for local primary schools, to chess, break-dancing and ‘banter’ tutorials for the residents of TLC Nursing Home in Maynooth.

Speaking during Community Engagement Week, Students’ Union President Ben Finnegan commented: “The students of Maynooth University have a great relationship and a real affection for Maynooth Town, so it is important that we give something back to the local community in whatever way we can.   Maynooth University is fortunate enough to have a broad and eclectic community of student clubs and societies that have each helped to enrich student campus life for many years.  Hopefully we can build on the momentum created by MSU Community Engagement Week and use our skills to continue to develop our relationship with the local community throughout the coming year”.

The Maynooth University GAA Club invited 3rd & 4th class primary school pupils from the four Maynooth primary schools to participate in blitz games, each team was assigned a Maynooth University  GAA hero as their team leader. The highlight of this event was the presence of all four winning trophies, the Sam Maguire (Football), Liam McCarthy (Hurling), Mary Quinn (Ladies Football Intermediate) and the Kay Mills Cup (Camogie Premier Junior). Students, teachers and parents were invited to have their photos taken with the cups and meet with our Maynooth University “University GAA heroes”.  The event was also a fundraiser for the SOSAD charity and those that attend on the day were asked to donate €1 in the bucket at the entrance to the GAA pitch gates. Wednesday’s event, attended by members of local community bodies, businesses, schools and charities, is to acknowledge a new age of student and community interaction.