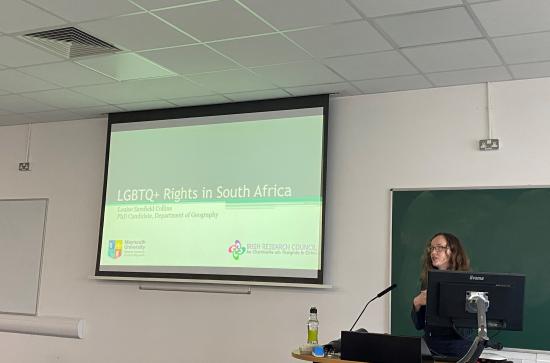 On March 10th, 2020, the MU Sexualities and Gender Network in conjunction with the Department of Law co-hosted a social justice week workshop on “Global Challenges for LGBTQ+ populations: Sexual Orientation and Gender Identity in the International Context”. The event featured presentations by Louise Sarsfield Collins of the Department of Geography on the LGBTQ Experience in South Africa. Louise’s presentation focussed on the potential impact and limitations of law reform in achieving social change for LGBTQ populations. Fergus Ryan of the Department of Law  offered an overview of the global experience of being LGBTQ+. Fergus highlighted, in particular, the severe human rights abuses against LGBTQ populations throughout the world, as well as efforts to resist and survive in such contexts.

The workshop also featured a screening of Trans*it, a short documentary by Maria Avgeri of Maynooth University Department of Law that poignantly charts the experience of LGBTQ asylum-seekers in Greece.