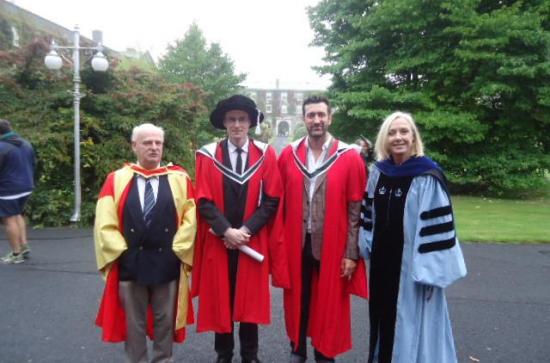 Eoin Flaherty, postdoctoral researcher with the New Deals project and Irish Research Council Postdoctoral Fellow in Maynooth University, has been appointed to a permanent lecturer position in the Department of Sociology and Social Policy at Queen’s University Belfast.

Eoin has been appointed as part of the quantitative social science (Q-Step) initiative, one of whose centres is located within QUB Sociology.  He is currently working on the dynamics of declining labour share of national income in advanced capitalist economies, examining the role of factors such as globalisation, financialisation and national institutional regimes.  Eoin has been a fantastic citizen of the Department of Sociology and NIRSA over the years and we look forward to staying in touch with him in this new stage of his sociological life.

Eoin completed his PhD on capitalist development and socio-ecological resilience in nineteenth century Ireland in 2013, under the supervision of Dr. Eamonn Slater. The photograph shows Eoin at his graduation in September 2013.