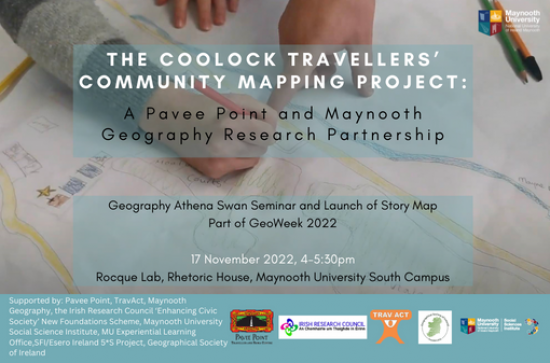 On behalf of the Pavee Point Roma and Traveller Centre, TravAct, and Maynooth Geography, you are invited to the launch the StoryMap for the Coolock Travellers' Community Mapping Project on Thursday, 17 November, at 4pm in Rocque Lab, Rhetoric Bldg (South Campus). Funded by the Irish Research Council 'Enhancing Civic Society' New Foundations grant, MUSSI, and the Experiential Learning Centre, in addition to the sponsoring organisations, the digital StoryMap is a significant outcome of almost two years of work that builds upon a four-year collaboration between Pavee Point Traveller and Maynooth Geography researchers, which includes the Pavee Roads Home StoryMap.

An Athena Swan Geography seminar will accompany the StoryMap launch, with a welcome from Pavee Point by Professor Anastasia Crickley, followed by brief presentations, videos, and demonstration introducing the history and outcomes of the project by the Traveller-led  research team. Following question and answer, we will invite the audience to explore the digital StoryMap, which has two maps (one with audio and edited stories about places of belonging), one narrative map, and sections offering further resources and information about the importance of community mapping as an anti-colonial practice building upon local knowledges.

Tied to this launch will be a digital exhibition the week of 14-18 November in the lobby of Maynooth Library, which will include a large colourful wooden map resulting from numerous workshops led by the TravAct Coolock Traveller Team. The digital StoryMap, which is based on the wooden community, is one of a number of outcomes for the larger project. Last month, an exhibition of the wooden community map was featured as part of Pavee Point exhibition on 'Belongings' for Culture Night, and a conference paper presented at the national Travellers' conference at NUI Galway.

The project launch is part of the Maynooth Geography Seminar Series and will also be sponsored also by the Geographical Society of Ireland, the national professional association of Geographers in Ireland, as part of international 'Geography Awareness Week' (GeoWeek).

There will be a reception to follow the launch. If you would like to attend please RSVP here.