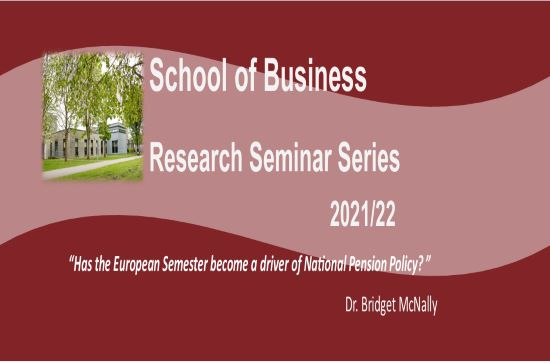 Join us for our next Research Seminar with Dr Bridget McNally, Associate Professor School of Business Maynooth University.

Abstract
The European Union’s ageing societies poses major policy challenges for pension systems. Since both the economies and the societies of Member States are increasingly integrated, the success and failure of national pension policies and reforms has an ever-increasing impact beyond national borders and on the smooth running of the European Monetary Union. This means that pensions are increasingly becoming a matter of common concern in the EU and have earned a place on the European Commission’s policy agenda. Planning for policy harmonisation, and the Europe 2020 growth and jobs strategy, calls for deeper integration and coordination of economic and budgetary policies. However, notwithstanding that the EU acts in the regulatory domain regarding pensions, the subsidiarity principle and member state autonomy over taxes, limits the EU’s power regarding social security.
This paper is a comparative study of recent pension system reforms in the Netherlands and Ireland to analyse how the European Semester influences pension reform in each country. It examines how pension reform is framed in the European Semester process, through analysing the Annual Growth Surveys (AGS), and the Country Specific Requirements (CSR) for the Netherlands and Ireland. As a theoretical lens to understand the discursive processes in the AGSs and CSRs, this paper employs discursive institutionalism (DI). While institutionalism is concerned with how institutions shape and influence outcomes, DI concerns ideas, and how they are communicated through discourse. Using the DI framework, we identify the form and type of ideas that flow from the EU to its Member States in its AGSs and CSRs and which ideas are implemented as policy. We find that there is a divergence in effectiveness between cognitive and normative ideas in EU discourse, - cognitive ideas are privileged over normative ideas. This divergence needs to be addressed if social sustainability is to be elevated to equal cost containment as a philosophical underpinning of pension reform.

About the Speaker
Dr. Bridget Mc Nally qualified as a chartered accountant in 1985 and as a member of the Irish Tax Institute in 1987.  Post qualification, she worked in professional practice as a taxation consultant with Arthur Andersen & Co. and in 1991 moved to Irish Life & Permanent Plc, where she subsequently became head of group tax. In 2000, she joined Maynooth University as a lecturer in accounting. She completed her M.Litt in 2004 and her PhD in 2011.  In 2020, she was appointed as Associate Professor in Accounting and as one of the Deputy Heads of the School of Business, Maynooth University. Her current research interests centres on old age retirement provision and on the practical application of International Accounting Standards. She has published both nationally and internationally and has presented her research at numerous peer reviewed conference presentations, nationally and internationally. She is a member of the Irish Pension Policy Research Group (PPRG) and the European Network for Research on Supplementary Pensions (ENRSP).