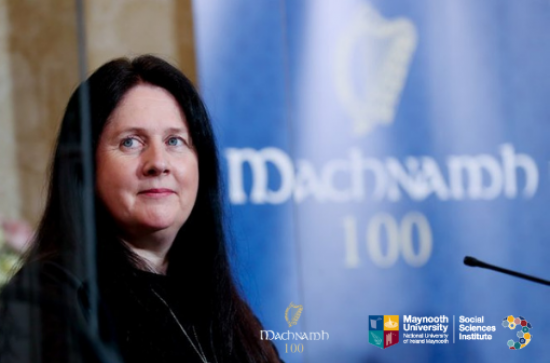 The President invited prominent scholars to discuss issues of social class, land and the role of women as they relate to the events of 100 years ago.
The principal address at the seminar was given by Dr Margaret O’Callaghan of Queens University Belfast. Her paper on 'Recovering Imagined Futures' was responded to by a panel consisting of Dr Caitríona Clear (NUI Galway), Professor Linda Connolly (NUI Maynooth), Ms Catríona Crowe, Archivist, and Dr John Cunningham (NUI Galway). President Higgins, too, provided a response, focusing on ‘Land, Social Class, Gender and the Sources of Violence’.

Machnamh 100 is an initiative of President Higgins that builds on his extensive work to date during Ireland’s Decade of Commemorations that has examined and explored seminal events such as the Lockout of 1913, the First World War, The Easter Rising, the Flu Pandemic, the election of 1918 and the first Dáil. Machnamh 100 is being supported by the Government and by RTÉ.

The term “Machnamh” is an ancient Irish concept encompassing reflection, contemplation, meditation and thought. In the context of this initiative, President Michael D.  Higgins will host a series of seminars inviting reflections on the War of Independence, the Treaty Negotiations, the Civil War and Partition. Leading scholars, with an array of perspectives, have shared their insights and thoughts on the context and events of that formative period of a century ago and on the nature of commemoration itself.

Through Machnamh 100, President Higgins has facilitated presentations and discussions on specific themes, explored more fully the various aspects of that period in Ireland’s journey, and its legacy for the societies and jurisdictions that were to emerge subsequently.

Prof. Linda Connolly: "As centennial Ireland approaches the commemoration of the Civil War and the very violent foundation of the new Irish state, we might ask 'who will be remembered?' ”

Full event can been seen here