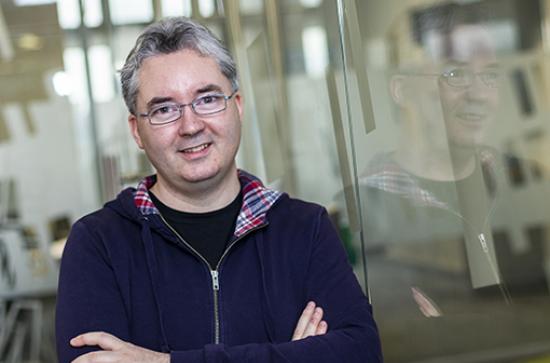 A Maynooth University computer scientist is one of the leaders of a team which has made a significant breakthrough in the emerging field of molecular computing by using DNA to develop a multi-purpose, reprogrammable molecular computer.  Professor Damien Woods, who completed his PhD at Maynooth University in 2005 and recently joined the University’s academic staff, is joint lead author of the study, which he largely carried out with his former colleagues while at Caltech.  Their work was published today in the prestigious journal Nature.

Professor Woods said that the team’s breakthrough takes inspiration from the pioneering work of Alan Turing in computing during the last century.  The team, whose leadership also includes Professor Erik Winfree of Caltech and Professor David Doty of University of California, Davis, designed DNA molecules that can carry out reprogrammable computations, for the first time creating so-called algorithmic self-assembly in which the same hardware can be configured to run different software.


"Think of them as nano apps," said Prof Woods.  “The ability to run any type of software program without having to change the hardware is what allowed computers to become so useful. We are implementing that idea in molecules, essentially embedding an algorithm within chemistry to control chemical processes."

While silicon computers use electricity flowing through circuits to carry out tasks, the molecular computers attach strands of DNA together to make larger objects that execute a program, effectively, in computer terminology, manipulating ‘bits.’  A total of 21 different DNA programs have been developed, for example determining whether 6-bit inputs such as 011001 contain an odd or even number of 1s, or are palindromes (i.e. reads the same backward as forward).  Another generates random numbers.

The end result is a test tube filled with billions of completed algorithms, each one resembling a knitted scarf of DNA, representing a readout of the computation. The pattern on the "scarf" gives the solution to the algorithm that was run. The system can be reprogrammed to run a different algorithm by simply selecting a different subset of strands from the roughly 700 that constitute the system.  The algorithms have been able to carry out a variety of tasks, including drawing repeating and random patterns, counting to 63, and performing equality checks.

"We were surprised by the versatility of programs we were able to design, despite being limited to six-bit inputs," said Prof Woods, who also carried out some of his research while based at the French national institute for computer science Inria. Prof Doty adds, "When we began experiments, we had only designed three programs. But once we started using the system, we realised just how much potential it has. It was the same excitement we felt the first time we programmed a computer, and we became intensely curious about what else these strands could do. By the end, we had designed and run a total of 21 circuits."

Although DNA computers have the potential to perform more complex computations than the ones featured in the Nature paper, Prof Winfree cautioned that one should not expect them to start replacing the standard silicon microchip computers.  Nor would Prof Woods be drawn on potential applications in obvious areas like medicine and biotechnology. “That is not the point of our work. We are showing what can be done and it will be up to others to apply it to the real world. No one would have foreseen the iPhone back in Turing’s day, for example. We are proving what can be done at a molecular level, which opens up a whole world of possibilities.”

Commenting on the paper, Maynooth University Vice President for Research and Innovation Professor Ray O’Neill said: “The work of Damien and his colleagues is truly ground-breaking and gives a genuinely exciting sense of what is possible in the new world of molecular computing. Our students will undoubtedly be beneficiaries of this. We are delighted to have welcomed Damien back home to Maynooth and look forward to future developments of this research.”

The paper is titled ‘Diverse and robust molecular algorithms using reprogrammable DNA self-assembly.’  Coauthors of the paper include Cameron Myhrvold, Joy Hui, and Peng Yin of Harvard University, and Felix Zhou of the University of Oxford. Funding to support this research came from the National Science Foundation and NASA. Damien Woods' ongoing work is being supported by the European Research Council (ERC), Science Foundation Ireland (SFI) and Maynooth University.