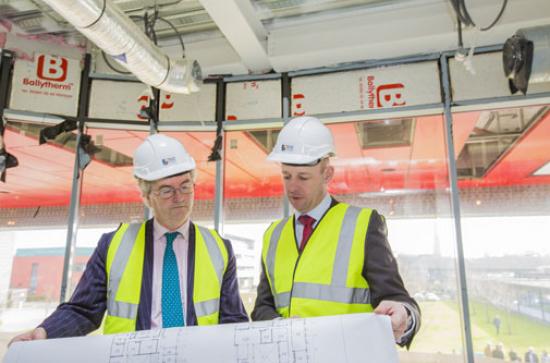 Maynooth University has announced a €150 million investment to develop academic, research and residence facilities as part of its Campus Master Plan. The investment is backed by new support from the European Investment Bank (EIB), which will provide €76 million for the scheme, alongside financing from University resources, and the Programme for Research in Third-Level Institutions (PRTLI), co-funded under the European Regional Development fund.

Among other projects, the long-term loan from the EIB will fund: the construction of new Information and Communications Technology (ICT) and Education hubs, apartment accommodation for 300 students, state-of-the-art academic and student services buildings, and sports facilities. These projects represent the first phase of a burgeoning Campus Master Plan that will facilitate the University’s growth to 13,000 students (from 10,500) by 2020. The Plan will be refined through internal and external consultation processes in the immediate months.

Professor Nolan will also announce the commencement of a University-wide consultation process on a comprehensive Campus Master Plan, to be followed by a public consultation period.

“As Ireland’s fastest growing university, we are developing our campus to support the rapid increase in student enrolment we expect over the next decade,” he said. “Students have realised that not only is the quality of our teaching and research second to none, but that we also offer an exceptional student experience to build the skills that students, as well as employers, recognise as increasingly valuable. It’s essential that our campus is able to accommodate our continued plans for growth and excellence in education. We are tremendously grateful to the EIB for enabling the University’s vision to progress.”

Jonathan Taylor, the EIB’s Vice-President, will be in Maynooth on Wednesday 18 February to announce the investment.

Speaking ahead of the announcement he said: “The European Investment Bank is committed to supporting investment in higher education in Ireland and across Europe.  Maynooth University demonstrates a clear vision to develop a truly world-class campus to cater for growing student numbers and we are pleased to support the university’s ambitious expansion plans. The planned campus expansion being announced will strengthen Maynooth University’s role as one of Europe’s leading third-level institutions and contribute to success in the years to come.”

The following projects included in the €153.1 million total investment will be completed within the next five years:

Background information:
The European Investment Bank (EIB) is the long-term lending institution of the European Union owned by its Member States. It makes long-term finance available for sound investment in order to contribute towards EU policy goals.