From Charlie Hebdo to the Alt-Right and Fake News 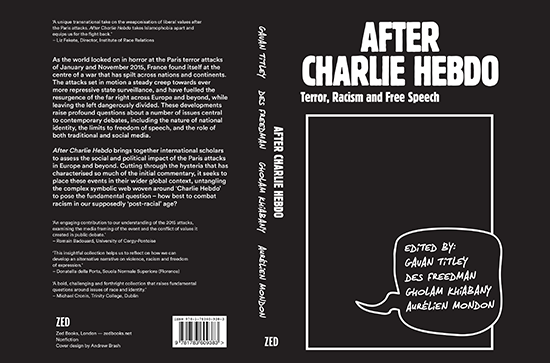 The alt-right and fake news are relatively new terms in the common vernacular. One reason behind this is that the rise and sophistication of digital media is allowing partisan players to enter the market and scale up quite quickly.
This is the subject of a new book project underway by Dr Gavan Titley, a senior lecturer in the Department of Media Studies at Maynooth University. The publication, due in mid-2018 is called, ‘Racism and Digital Media,’ seeks to explore how far-right movements successfully use new forms of media to push their message.
“What I’ve been trying to look at is how digital media systems speeds things up, or extend connections and circulations in all these unpredictable ways, and what that means for the politics around racism and anti-racism in Europe in particular.”
Digital tools enable the partisan players to scale up cheaply, “without having to pay lip service to the professional ethics or routines of journalism.” And yet, the mainstream media is fascinated by them, covers them, and, “They get integrated into the wider news cycle by the very people they were out to destroy.”
This line of enquiry has lead inevitably to the phenomenon of ‘fake news.’
“The way that I try to explain fake news to students is that the issue is not so much that it’s fabricating content and it’s false; it’s more that it creates a situation where anything can be presumed to be false or fake,” Dr Titley says.  “Everything looks to be flat, everything is presented to you without hierarchy, so why should one thing be inherently more trustworthy than something else? And it’s very difficult to embed good journalism in that context.”
“You get these political entrepreneurs on YouTube that can build these enormous audiences—more than RTE gets in all its programming combined—and have access to new publics that are very transnational and very young. And we haven't really come to grips with the political consequences of that.”
Dr Titley’s research is based on overlapping interests.
“The first is in contemporary media systems and how the speed and circulation of information and ideas is reshaping politics; and secondly the sociology and politics of racism, particularly in Europe,” he tells The Bridge. “When you put those two interests together, it’s about how news is made and broadly the way in which networked media works.”
One example: The Charlie Hebdo attack.
“It happened in early January 2015 and had immediate repercussions obviously in France but also elsewhere. The government in Senegal collapsed, there were massive protests in Turkey, and American journalists were at each other’s throats.
“I got together with a couple of colleagues in Goldsmiths (University of London) and we ran a quick response seminar. We invited people both from France and also French-focused scholars working elsewhere.”
From this came a recently released book edited by Dr Titley, ‘After Charlie Hebdo, Terror, Racism and Free Speech.’
Dr Titley said that many people responding to the atrocity had never heard of the newspaper, which created a space in which many people ascribed their own values to it. He summarised it as being about intensive media events which have these transnational consequences - and political consequences that are unpredictable.
Whether it’s battling fake news or challenging a misappropriated identity, Dr Titley thinks journalism is facing a profound crisis, more than simply how traditional media can win back trust.
“There’s a shift in the way that people think about media systems and their relationships to society that’s not going to come back to the cosy established national television channels and a set of newspapers that are the centre of gravity,” he says. “Lots of choice is radically relativising how people think about the entire media environment. And that’s not a very cheerful conclusion.”
Back to top