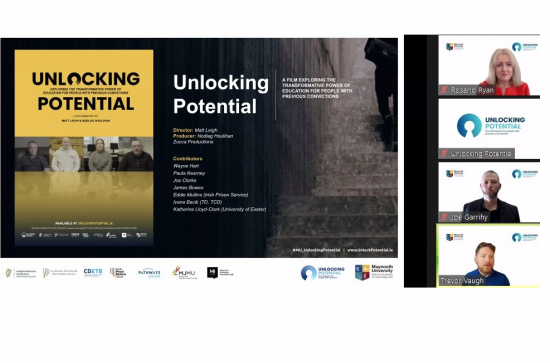 Monday January 17th saw over 230 persons attend the launch of Unlocking Potential (UP), a project aiming to make higher education more accessible for people with convictions. UP has now published its Fair Admissions Toolkit and other resources on its website (www.unlockpotential.ie), including:

Prof. Eeva Leinonen (President, MU) opened the event. Prof. Leinonen discussed the importance of access to higher education across society, its role in helping people reach their full potential, and the equal potential of people with convictions to study. The President thanked the project partners and drew attention to the importance of financial support for students with convictions.

Simon Harris TD, Minister for Further and Higher Education, Research, Innovation and Science spoke about the ‘transformational’ potential of the project. The Minister noted Maynooth’s commitment to access and inclusion, and expressed hope that the project would foster a common approach to admissions policies across the sector. He spoke of his recent visit to a prison, reflecting on the dedication of prison educators and the yearning of people in custody for clear pathways to further their education. Minister Harris further highlighted the role of education in reintegrating people with convictions, stating that it ‘helps ‘break cycles of deprivation and cycles of criminality. Education is a great equaliser but access to education is not equal.’

Prof. Claire Hamilton (Unlocking Potential Chair and Head of Criminology, MU), situated UP in the wider policy context. Hamilton noted the crucial difference between Garda Vetted and Non-Garda Vetted programmes, explaining that a fair policy would usually not require disclosure of convictions for the latter. Calling for a cultural shift and a whole-institution approach, Hamilton asked HEIs to see students with convictions as a resource rather than a burden. Pointing to research abroad, Prof. Hamilton noted the risk of deterring students by requiring unnecessary disclosure of convictions, and the lack of evidence to support restrictive admissions processes based on campus safety.

Trevor Vaugh (Unlocking Potential member and Principal Investigator, Mi:Lab), provided an overview of the new UP website (www.unlockpotential.ie) and premiered the project’s documentary, directed by Matt Leigh. It shows four students with prison experience or convictions speaking about their journeys to education, and the cultural and structural barriers they faced. Others featuring in the documentary and speaking to the social inequalities and complex circumstances that lead to crime and imprisonment included Eddie Mullins (Governor, Wheatfield Prison), Dr. Katherine Lloyd Clark (Assistant Director, Student Access, Recruitment and Admissions, University of Exeter), Dr. Ciara Bracken-Roche (Assistant Professor in Criminology, MU), and Prof. Ivana Bacik TD.

The keynote speaker, Sally Rutterford (Head of Admissions and Deputy Director, Cardiff University), then spoke of her work with UCAS and Unlock in the UK to promote and implement best practice for applicants with convictions across the sector. She told how, upon the introduction of GDPR, her university realised a need to develop their convictions policy and to collaborate across the sector to drive policy change. Rutterford argued that HEIs cannot duplicate work by the judicial system to assess suitability for engagement in society. Detailing the mechanics of implementation, she defined Cardiff’s approach as support-based, focusing on whether a student’s restrictions might prevent success and how these can be overcome, with a dedicated team to provide guidance for students.

Attendees then heard a panel of respondents, including Caitríona Ryan (Higher Education Authority), whose work includes the new National Access Plan. Ryan said that people with convictions should be recognised as a group in need of ongoing support from institutional access structures, within a whole-institution approach. Ryan welcomed the scholarships, noting that finance was the main barrier for many students. James Leonard (Team Leader, Coolmine Therapeutic Community) suggested that universities establish addiction recovery societies to help change cultures and reduce stigma. They should also introduce greater support for part-time study, and help graduates with convictions gain employment. The last panellist, Paula Kearney, is studying for a Master’s in Rights and Social Policy at MU. She spoke about the need to build confidence and reduce fear among students, and to avoid requiring them to tell their stories repeatedly within admissions processes.

Mark Wilson (Director, Probation Service) spoke next to launch the KickStart Scholarships. He spoke about the work of the Probation Service, the demographic of its clients, the Working to Change Strategy and ongoing work relating to spent convictions. Wilson confirmed that €100,000 is available for the 2022/23 academic year, with the fund launching in March.

Dr. Rose Ryan (Director of Access, MU) closed the event by asking attendees to take four actions: Partnership - reach out across institutions and regions to establish partnerships; Policy - develop institutional and national policies on the rights of people with convictions to education; Practice - develop targeted support practices for students with convictions, including a dedicated point of information and contact; and Promotion - promote the website and toolkit, raising the issue in any forum possible and challenging negative stereotypes.

The UP Team has published an article on their work on RTÉ. The Irish Examiner, the Law Society Gazette and Irish Legal News have since covered the launch.

UP is led by the Maynooth Access Programme and the Maynooth School of Law and Criminology, in partnership with the Maynooth Innovation Lab (Mi:Lab), the Irish Prison Service, the Probation Service, the Pathways Centre (City of Dublin Education and Training Board) and the Irish Penal Reform Trust. The project is funded principally by the Department of Public Expenditure and Reform under the Public Service Innovation Fund, with further financial support provided by its partner organisations.