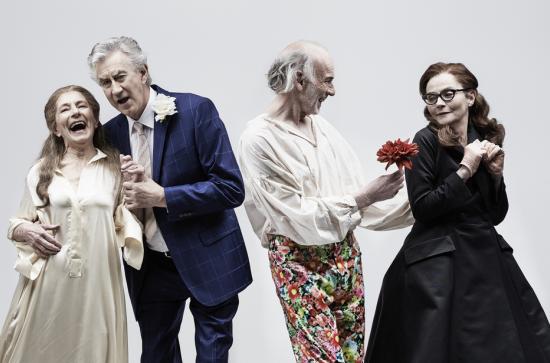 The curtain pulls back as Johnny Cash's Ghost Riders in the Sky welcomes us to Athens.  Front and centre two walking frame-bound Athenians duel with rapiers, while others dance (slowly), and a crude blue moon is painted on to the back wall. It becomes apparent very quickly that this Athens' high white walls do not contain a kingdom. It's a nursing home. At this point you may think you have it wrong, then a familiar speech pattern crackles through the nursing home's intercom: ""Now, fair Hippolyta, our nuptial hour/ Draws on apace.." Our lovers are older than Theseus and Hippolyta, Egeus is Hermia's son rather than father, and the fairies in the forest are no more than the vivid dream of nursing home residents; this is Gavin Quinn's A Midsummer Night's Dream.

The inversion of characters roles, may seem like a gimmicky, superficial change at first, but it becomes apparent that this change adds a different texture to the play. The lovers chasing after each other is no longer the obnoxious folly of horny teenagers, but is instead a meaningful attempt to rekindle this folly, a goal only achievable in the absence of authority, controlling children, and with the liberation that only dreams can bring. This effect is aided by the interspersed, dreamy deliveries of Shakespeare's sonnets throughout the play, most aptly by Sonnet 27 delivered as the Athenians are on their way to bed and fairy time is coming: "Weary with toil, I haste me to my bed,/The dear repose for limbs with travel tired;/ But then begins a journey in my head.." The journey here is a journey to rejuvenated youth. The lovers are the highlight of the play and this is due in no small part to the performances of John Kavanagh (Lysander), Barry McGovern (Demetrius), Gina Moxley (Helena), and Áine Ní Mhuirí (Hermia) whose transformations from sluggish retirees to warring youths is endlessly entertaining.

Entertaining is a key descriptor of this production as it's full of playful cues, such as the painted on moon and sun in the background to simulate day and night. The lighting is similarly toyed with: Puck taunting the hand-torch wielding lovers, projectors casting shadows to simulate the woods, and in one of the play's funniest moments: Peter Quince (played by David Pearse) stepping out of a spotlight during the delivery of Pyramus & Thisbe's prologue to whimper. It is in the Rude Mechanics performance  that the production truly expresses its intent: to be irreverently fun. Despite the presence of the solemn sonnets and more serious moments like Oberyn and Titania's initial confrontation, as well as the influence of age inversion on the play's themes: It's a lot of fun. This energetic fun is presented from the opening cacophony to the  Mechanics "Burgomask" dance finale, or in this instance:  awkward dancing to Darude's Sandstorm. Puck may ask forgiveness if "we shadows have offended", but the play doesn't care if you are. More power to it.