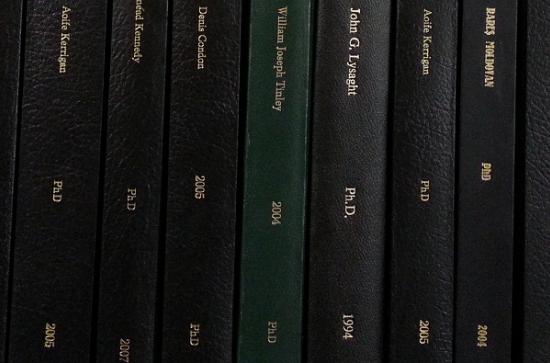 Congratulations to Theresa Harney on the completion of her doctorate in the Department of English in 2015! Theresa’s PhD entitled "'Coloured' Pasts in Post-Apartheid South African writing" was funded by a Government of Ireland Research Scholarship in the Humanities and Social Sciences from 2009-2012 and supervised by Dr. Íde Corley. She has taught classes on the BA programme in English at Maynooth University since 2011 and this summer, has worked as a Research Assistant to Dr Andrew van der Vlies at Queen Mary University of London on a project on Zoë Wicomb’s non-fiction. Always keen to share her work and engage with other scholars, she has presented her research at conferences at the University of Kent, the University of Birmingham’s Centre for West African Studies, University College Dublin, Trinity College Dublin, the University of Limerick and Waterford Institute of Technology. We wish Theresa continuing success with her career and hope her research will lead her in exciting directions!

This dissertation examines a set of novels concerned with the history of slavery, “coloured” identity and the politics of gender and sexuality in post-apartheid South Africa: Achmat Dangor’s Bitter Fruit, Anne Landsman’s The Devil’s Chimney, Rayda Jacobs’s The Slave Book, and Zoë Wicomb’s Playing in the Light. Each writer’s engagement with the history of slavery highlights discursive and material continuities between the colonial, apartheid and post-apartheid eras. By making the legacies of slavery for “Coloured” women, in particular, visible, these novels qualify the celebratory rhetoric of the New South Africa and point to the continued challenges facing the democratic state. In doing so, they interrogate the narrative of progress developed by the Truth and Reconciliation Commission, which moves from the horror of the apartheid past to the multiracial democracy of the “rainbow” nation. Representations of female slaves in these fictions raise questions about the construction of contemporary “coloured” identity. Through their examinations of motherhood, domestic labour and domestic space, they reveal the persistence of a gendered and racialised logic of reproduction in contemporary South Africa that was first generated under slavery and that marks the state as anachronistic.

While deploying psycholanalytic analyses of “race” and subjectivity under North American slavery by Hortense Spillers, Lee Edelman and Valerie Rohy, the dissertation remains attentive to the historical specificity of the South African context. At the same time, the novels considered here demand a reconsideration of the space of the nation itself. Invoking a broader history of slavery through their allusions to the North American slave narrative and to the types of forced migrations that occurred under slavery, these texts invite a re-conceptualisation of the role of the nation-state and ask us to consider South Africa’s place within transnational networks of capital.