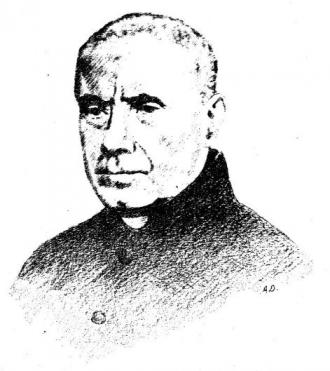 The Institute of Electrical and Electronic Engineering (The IEEE), the world's largest professional association for the advancement of technology, initiated a Milestones program in 1983 to honour significant achievements in the history of electrical and electronics engineering. In March of 2006, the IEEE accepted a proposal to have the scientific contributions of Irish Scientist, Rev Nicholas Callan, recognised as an IEEE historic milestone in electrical engineering.

To mark the occasion a permanent display has been placed in the foyer of the Electronic Engineering and Bio-Sciences Building at Maynooth University, together with a bronze plaque presented by the IEEE. The plaque was unveiled by Michael Lightner, President of the IEEE, at a dedication ceremony on the evening of the 5th September 2006. 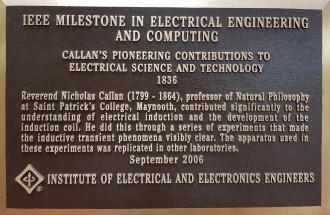 The citation on the plaque reads: "Callan's Pioneering Contributions to Electrical Science and Technology 1836

Reverend Nicholas Callan (1799 - 1864), professor of Natural Philosophy at Saint Patrick's College Maynooth, contributed significantly to the understanding of electrical induction and the development of the induction coil. He did this through a series of experiments that made the inductive transient phenomena visibly clear. The apparatus used in these experiments was replicated in other laboratories."

Reverend Nicholas Callan (1799 - 1864), the first Irish Scientist to achieve this recognition, was a priest and professor of Natural Philosophy at Saint Patrick's College Maynooth in the 1800s. He was a pioneer in the development of electrical science and made many significant contributions to the field including the invention of the induction coil, the forerunner to the modern day transformer and a key component in many electronic devices such as car ignition systems and camera flashes.

For a brief account of Callan's research see the History of Electrochemistry, Electricity and Electronics website developed by Prof. E. Katz at The Hebrew University of Jerusalem.
You can view a pdf version of the page here:  Callan_history_chem 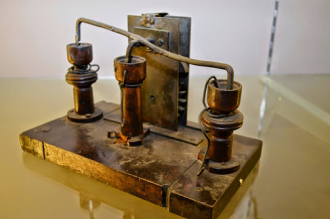 Additional information on Callan can be found in the various documents and links listed below. These were compiled as part of the Milestone nomination process.