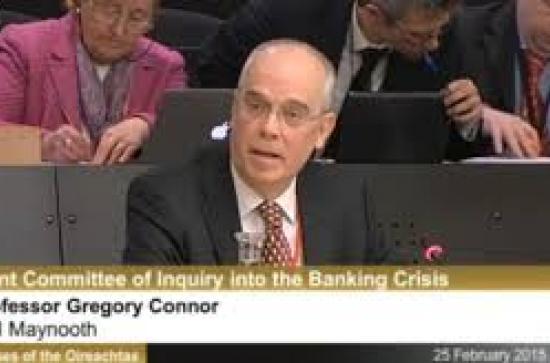 Professor Gregory Connor, Maynooth University gave expert testimony before the Oireachtas Banking Inquiry on Wednesday, 25th February 2015. Professor Connor, an expert in portfolio risk analysis, factor modelling, financial econometrics and security market pricing told the Inquiry that taken together the domestic Irish banks were insolvent in 2008 and giving a blanket guarantee to them was a costly error. In further evidence he noted that the Central Bank should have stopped property lending, and also stopped so many foreign banks from investing their spare money in Ireland. "The Central Bank and financial regulator should have blocked the enormous debt capital inflow and the too-fast growth in property development lending," he said.  "If it had done either of those things, in my opinion, the Irish banking crisis wouldn’t have happened - and it should have done both.." You can hear excerpts from Professor Connor's testimony here. A full transcript of Professor Connor's testimony is available here.