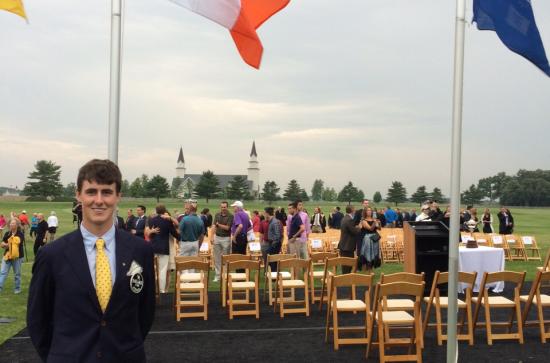 Gary Hurley at the opening ceremomy for the 2015 Palmer Cup at Rich Harvest Farms, Illinois.

Maynooth University’s Gary Hurley (3rd Year Business & Management) and Paddy Harrington Golf Scholar will be flying the flag for Irish golf once again this week as part of 2015 European Palmer Cup Team. Hurley is making his second appearance at the annual Ryder Cup collegiate event having made his debut for Europe in 2013 by winning the R&A’s Foundation Scholars Tournament at St. Andrews. Hurley is only the second European based college student to compete in two Palmer Cup’s after Spain’s Gonzalo Castano who is now a successful player PGA and European Tour professional.

Hurley earned one point from four matches in two years ago were he partnered former Ireland teammate and current European Tour professional, Kevin Phelan. In 2013, Europe was well beaten by 20.5-9.5 against one of the strongest United States Palmer Cup teams which included the latest PGA Tour young guns, Justin Thomas, Patrick Rodgers and Daniel Berger. Hurley is hungry for a win this time around.

“I want to win it this time, especially when it’s on their home ground,”

Hurley now ranked 38th in the World Amateur Golf Rankings was selected for Team Europe in April as a committee pick based on his exceptional performance worldwide over the past year. In 2014, he notched up six top five finishes in major international events  which includes; T2nd at European Amateur, 3rd at Lytham Trophy, 5th at Brabazon Trophy “English Men’s Stroke play”. In 2015, he has continued is consistent form with six top ten finishes worldwide highlighted by Runner-Up at Spanish Amateur, 3rd at the Southern Cross Invitational in Argentina.