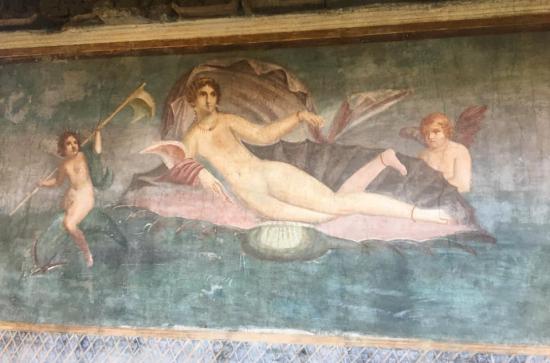 Venus in Pompeii, one of the many sites visited by our students

During the inter-semester break (27th – 31st January), a party of 15 Maynooth classicists, led by Dr. Jonathan Davies and Dr. Kerry Phelan, set off on the first Ancient Classics Department study trip to Italy, to examine first-hand the impressive and highly revealing archaeological remains of Rome and the Bay of Naples. The trip offered our students the opportunity to enrich their studies of the history, literature and culture of the Roman world by engaging first-hand with archaeology, and to come to an appreciation of just how valuable material culture is for our understanding of the ancient past.

On the first day, after a brutally early flight from Dublin, the group visited the Domitilla Catacombs, which include the underground church of Saints Nereus and Achilleus. There, they inspected the remarkable frescoes and graffiti in the tunnels, learned about Early Christian burial practices, and discovered how Early Christians creatively appropriated, reused and revalued pre-Christian iconography. The following day was an exhaustive (and exhausting!) tour of the monuments of Imperial Rome, including the Circus Maximus, the Capitoline, the Imperial Forums, the Colosseum, the Roman Forum, the imperial residences on the Palatine, and the Pantheon. The day not only brought our students face-to-face with some of the most renowned and remarkable archaeological remains anywhere in the world; it also provided a masterclass in the use of urban space for political messaging and partisan commemoration, and on the impact of autocratic government on urban space.

Day three saw the group transfer to Naples and, in the afternoon, visit the National Archaeological Museum, a repository of many of the moveable treasures from nearby Pompeii and Herculaneum. The Museum houses some of the greatest treasures of ancient art, including the Alexander Mosaic, the Farnese Bull, and many of the vivid and masterful frescoes preserved by the eruption of Vesuvius in AD 79. Additionally, a group of students also went on the Naples Underground tour, which saw them navigating the city’s subterranean spaces, including bunkers from the Second World War, ancient quarries, and underground aqueducts and cisterns. On the fourth day, the group took the Circumvesuviana train to the ruins of Pompeii, one of the world’s most extraordinary and evocative archaeological sites. We comprehensively toured the streets of the ancient city, examining the houses, tombs, theatres, brothels, baths, inns, monumental palaestra and grandiose amphitheatre, ending in the famous Villa of the Mysteries, with its evocative (and suitably mysterious) megalographic frescoes, possibly depicting Dionysiac initiation rites. Friday morning completed the trip, with a tour of the much smaller but, in some ways, even better-preserved site of Herculaneum, also destroyed in the 79 eruption. Highlights included the majestic Hall of the Augustales, the richly-appointed House of the Stags, and the skilfully-executed and perfectly-preserved relief sculpture of Achilles healing Telephus.

Overall, the trip was a resounding success, and of great benefit to the students who participated. More than just a study trip, the tour aimed to bring the past alive for our students in a way that classroom study alone cannot, to inspire them with renewed passion for the study of the ancient world, and to re-emphasize to them the vital importance of ancient classics among the humanities subjects.