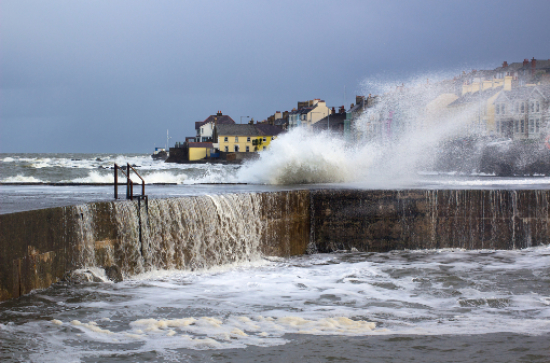 New research led by the Hamilton Institute and ICARUS Climate Research Centre at Maynooth University, has generated an updated sea level dataset for Dublin stretching from 1938 to 2016.

Overall, the trend shown in the data corresponds to an estimated sea level rise between 1953 and 2016 of 1.1 mm per year in Dublin, according to the research published in Ocean Science.

“Fluctuations are identified with sea levels rising from 1982 to 1988, before falling from 1989 to 1996, and once again rising from 1997 to 2016 at a rate of 7 mm per year.  This recent sea level rise is faster than expected at approximately double the rate of global sea level rise.” said Amin Shoari Nejad, lead author of the research and a PhD student at the Hamilton Institute at Maynooth University.

“If you look at too short a timeframe, the fluctuations over decades could impact estimates of trends. But this research has taken a longer view and what we are most confident about from looking at the stretch of years is the overall rise,” said Dr Gerard McCarthy, of ICARUS Climate Research Centre and the Department of Geography at Maynooth University.

The researchers at Maynooth, in collaboration with colleagues at UCC and DCU, are continuing to explore the reasons behind such fluctuations.

The researchers compared sea level records for Dublin Port, gauges at Arklow and Howth Harbour, and international datasets from the UK and France for their data quality checks. The Dublin Port record was calibrated by adjusting the ‘biased’ high water level measurements that affect the overall calculation of mean sea level. High waters were seen to be rising faster than nearby gauges so a model was built using the stable low water levels to compute the mean sea level.

“To correct these mean sea level values, we use a novel Bayesian linear regression that includes the Mean Low Water values as a predictor in the model. We validate the re-created MSL dataset and show its consistency with other nearby tide gauge datasets,” said Amin Shoari Nejad.

“Overall sea level rise is in line with expected trends but large multidecadal variability has led to higher rates of rise in recent years,” he added.

The research was carried out in collaboration with Prof Andrew Parnell at the Hamilton Institute at Maynooth University, Dr Brian Kelleher of the School of Chemical Sciences, DCU, and Emeritus Professor Robert Devoy, Department of Geography, UCC, Professor Peter Thorne and Alice Green of the ICARUS Climate Research Centre.

The article, ‘A newly reconciled data set for identifying sea level rise and variability in Dublin Bay’, published in Ocean Science is available at https://os.copernicus.org/articles/18/511/2022/.

The PREDICT project (https://www.dcu.ie/predict) was funded through the SFI Investigators Programme with co-funding coming from the Geological Survey of Ireland and the Marine Institute.