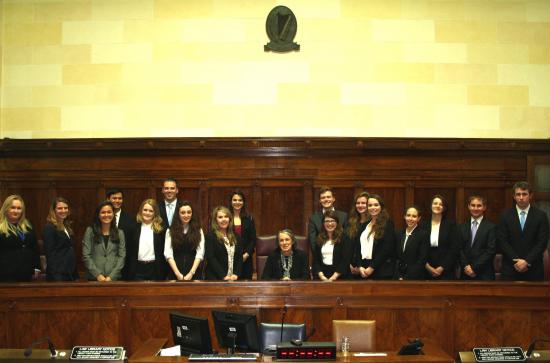 Over the past summer, two of our recent graduates, Freda McGeough and Rebecca Reid, participated in the Superior Courts Internship Programme for Law Students, a project initiated by the Hon. Mrs. Justice Susan Denham, Chief Justice of Ireland.

Here, Rebecca and Freda speak about their experiences.

“Being awarded the superb opportunity to take part in the Superior Courts Internship Programme, organised by The Honourable Chief Justice Mrs Susan Denham, was really a once-in-a-lifetime experience. During the four week placement, I was able to witness our judicial system in action in a wide spectrum of venues, ranging from the Supreme Court, the High Court, and the Central Criminal Court, to the Dublin Circuit Court.

I was assigned to intern with Mr Justice Abbott in the Family Law Court which was a true privilege, as I was permitted access to witness in camera court cases. As I had never previously studied family law, I was able to gain first-hand knowledge and insight into a brand new area of the law, which I found fascinating due to the daily diversity in cases stemming from divorces to adoptions and seeing the intimate impact the rulings had on the lives of the engaged parties.

The fascinating internship itinerary ensured that I was captivated throughout the four weeks, with contrasting elements raging from legal lectures, the ‘Calling to the Bar’ ceremony for newly appointed barristers, and the appointment of Mr Justice Peter Charleton to the Supreme Court.

One of the central highlights of my experience was being afforded the opportunity to meet The Honourable Chief Justice Mrs Justice Susan Denham as she is a personal hero of mine, being such a pioneering female figure in the Irish judicial system. The Chief Justice was focused on ensuring that we visited The Drug Treatment Court, which was evidence of her outstanding commitment to reforming the Irish legal system.

I would urge every law student at Maynooth University Department of Law to apply for this prestigious internship, as notwithstanding the immensely positive impact it will have on your career ambitions, you are being afforded unprecedented access to witness the sacred inner workings of the Irish legal system which will result in your mind being enlightened and amazed in equal measure.”

“During the summer months I participated in an internship programme organised by The Honourable Chief Justice Mrs. Susan Denham. Two students from each university in Ireland, and students from New York's Fordham Law School, attended the programme which lasted four weeks in total. Each student was assigned to a Judge and worked closely with them for the duration of the internship; I was assigned to Mr. Justice John Mac Menamin.

The main role of the interns was to conduct research. We were allocated spaces in the Judge's library, where throughout the programme we could avail of the extensive facilities to complete the various research projects that were given to us. However, when your Judge was in Court, you would also attend to take notes. After each hearing I would then discuss the case with Mr. Justice Mac Menamin, and also update him on the various legal memoranda on which I was working.

During the internship various events and trips were organised for all students:

I would encourage all students to apply for this internship. At first I was a little apprehensive about applying for the programme, as the thought of working closely with a Judge for four weeks appeared quite daunting. However, I settled in very quickly and the experience I have gained is invaluable for my future legal endeavours.”