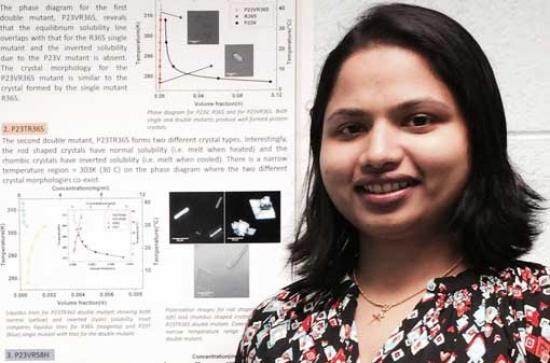 Susan James, a Ph.D. student in the Department of Chemistry, Maynooth University was awarded the Soft Matter poster prize at the 9th Liquid Matter Conference, held in Lisbon, Portugal on 21-25th July 2014. This international conference, held every three years was attended by research leaders from Europe, the US and Asia. Over 500 posters were presented over the week-long conference. Details of the award can be read on the Royal Society of Chemistry Soft Matter blog

Susan is working towards a Ph.D. in the lab of Dr. Jennifer McManus. The winning poster “Effect of mutagenesis on the phase transitions of human gamma-D crystallin” was based on research which is funded by an Irish Research Council Postgraduate Scholarship to Susan and a Science Foundation Ireland Research Frontiers award to Dr. Jennifer McManus. This interdisciplinary research examines how mutagenesis affects the self-assembly of proteins to form condensed structures such as aggregates and crystals, which has important implications in medicine, molecular biology, biochemistry and biophysics.

Susan was previously the recipient of the 2013 Wesley Cocker Prize from the Society of Chemical Industry, All Ireland Group, awarded to the best paper or patent on a topic of relevance to industrial chemistry. The winning publication, “Thermal and solution stability of lysozyme in the presence of sucrose, glucose and trehalose”, S. James, J. J. McManus, J. Phys. Chem. B, (2012), 116, 10182-10188, was based on research conducted for her M.Sc. degree, also under the supervision of Dr. McManus. This work was featured in “Staying Current – Formulation of Biopharmaceuticals” in January 2013.