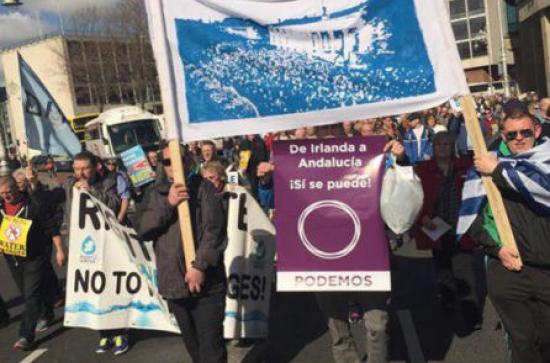 New research conducted by Dr Rory Hearne, Department of Geography, Maynooth University, has found that the recent water protests (the largest protest social movement in Ireland since Independence) was motivated by a range of factors and not just water charges.  People are protesting at the impacts of austerity (which was the most cited reason for protesting), a desire for complete abolition (and not just reduction) of water charges and against the privatisation of water. They are also motivated by the belief that the current (and previous) government have, through austerity and the bailout, put the interests of the banks, Europe, and the bondholders before the needs of the Irish people, and that the working, poor and middle income people have paid an unfair burden of austerity. Respondents identified ‘corruption’, ‘cronyism’ and a belief that the ‘establishment parties look after a golden circle of wealthy business people and corporate elite’ as reasons for public anger.

The research is contained in a report being launched today which is written and analysed by Dr Hearne.  The Report is entitled, The Irish water war, austerity and the ‘Risen people’: An analysis of participant opinions, social and political impacts and transformative potential of the Irish anti water-charges movement. The Report details the findings of a survey of 2,556 water protestors undertaken between  December 7th and 14th 2014. It was a survey of those who are opposed to, and protesting against, the water charges, and not of the general population.

92% stated that they do not intend paying for water charges and 90% felt the tactics of the Right2Water movement have been effective. This indicates a high level of confidence among protestors that the water charges and Irish Water will be abolished. It is also very supportive of the Right2Water trade unions, political parties and grassroots ‘Says No’ groups. Survey respondents believe the protests brought the water charges to the top of the political agenda and made the government "take stock and realise that the people of Ireland have had enough" and that "they are not taking this one lying down". Protestors intend to extend the campaign to boycotting the water charge.

A majority of respondents (54.4%) stated that they had not participated  in any previous protest. Respondents felt the water protests have been successful because it "is a genuinely grassroots and local movement and has mobilised every village, town and city of this country" and "rallied Irish people from all walks of life".  The respondents explained that, in their view, they have the power to stop the implementation of the water charges through large scale protest, non-payment and protest at water meter installations. This is different from other austerity measures such as the household charge where people did not have the same power to protest as it was enforced by revenue or cuts were made directly to wages and public services.

When asked, a majority of respondents described the media portrayal of the anti-water movement as either ‘undermining the campaign’ (46%) or  ‘unfair’ (41%). 82.6% were most informed about the campaign from social media while only 6.4% of respondents relied on traditional media outlets.

Very significantly, 45% said they voted for the main large parties (FF/FG/Labour) in 2011 but indicated that they are changing their vote to the opposition Left parties and independents in the forthcoming election. 31.7% said they will vote for PBP/AAA, 27.5% said for Left Independents, 23.9% for Sinn Fein and only 5.6% for ‘Right’ Independents. 77% of respondents said that they believed the most effective way of getting change was through protesting while only 28% saw contacting a political representative as effective.

Despite the strong support for ‘Left’ parties, a large proportion (79%) want to see a new political party formed. They identified that the issues such a new party should stand on include anti-austerity; anti-corruption, anti-cronyism; radical political reform and democracy. They want it to stand for fairness, equality, social justice, and the right to housing, health, water, education and protection of the poor and vulnerable. It should also stand up to Europe (particularly on the debt), and ‘take back’ Irish natural resources (gas, fisheries etc) ‘for the people of Ireland’.

Dr Rory Hearne, explained the significance of these findings:  “The outcomes of the survey raise a number of interesting findings and reflections for understanding the Irish anti-water charges movement and its impact on the changing nature of Irish politics and democracy. It suggests that the water movement represents a new form of ‘people-empowered’ politics. Interestingly, respondents also made reference to the failure of the main political parties to live up to the ‘ideals of the Republic’. What is clear from this ground-breaking study is that the water protests have catalysed a process of empowering significant numbers of Irish people who had not been involved in protest or anti-establishment politics before which is likely to have a big impact on Irish politics in coming years.”