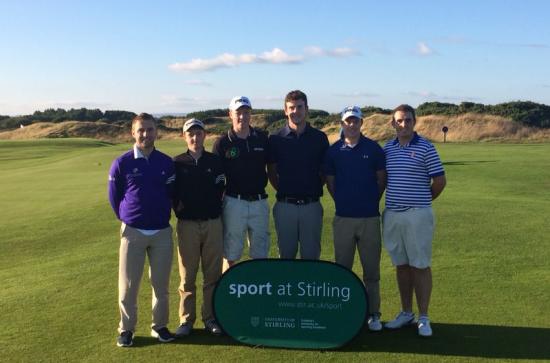 This year was the fourth staging of the Stirling Invitational at Dundonald Links which is now viewed as the season opener for the best collegiate golfers in the British Isles. Nearly ninety of the best student players, from Scotland, England, Wales, Ireland, Slovenia, Poland, Denmark and further afield started the tournament with aspirations to win the stunning Thistle Trophies; at the end of the event, it was only when the last putts were holed that both the men's and women's events were settled. Non collegiate invitations were given to the Independent Schools Golf Association (ISGA) & a select group from the Scottish Golf Union (SGU).

The Men’s team opened with team total of 295 (+7) to lie in a tie for second place with the SGU and trailed hosts Stirling by three strokes. The four scores came from Robin Dawson (72), Stuart Grehan, Ronan Mullarney (74) and Kyle McCarron (75). On day two, Maynooth got off to a fast start covering the front nine in a team total of (+3) with Dawson leading the charge on three under but the team struggled to capitalise and dropped shots over the closing holes to post a team total of 300 (+12) to finish in third place overall. The four counting scores included; Robin Dawson (72) Declan Loftus (72), Alan Lowry (77) and Stuart Grehan (79).

In the Men’s individual, Robin Dawson led the challenge for Maynooth posting a total of 144 (Level) after two rounds and trailed defending champion, Cormac Sharvin (Stirling) and former British Boys champion Ewen Ferguson (SGU) by two strokeswhere tied on 142 (-2). Dawson fired a final round (76) to finish in fourth place on four over par while teammate Kyle McCarron posted a sensational four under (68) the lowest round of the final day to finish in sixth place on six over for the championship.

The Women’s team opened with an impressive team total of 150 (+6) to lead by seven from ISGA and eight shots from Stirling. The two team scores came from Shannen Brown (74) the low round of the day and Shannon Burke (76). On day two, Maynooth got off to a slow start posting (+11) through nine holes and failed to recover the deficit on the back nine posting a team total of 164 (+20) to finish in second place behind defending champions Stirling.  The team scores came from Carla Reynolds (82) and Shannen Brown (82).

In the Women’s individual, Shannen Brown led the Maynooth charge after day one with a solid round of (74) with teammate Shannon Burke two shots back in fifth place. Both players struggled to replicate the form from round and finished fifth and sixth place respectively.