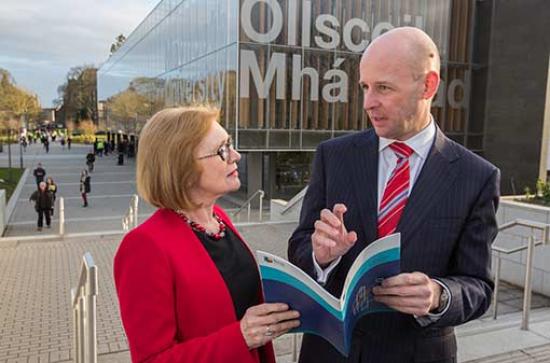 Minister for Education and Skills Jan O’Sullivan TD joined Maynooth University President, Professor Philip Nolan, today, to launch the University’s new undergraduate curriculum, a model unlike any other in the Irish university sector.

The university-wide initiative builds on Maynooth University’s strengths as an institution equally committed to both excellent teaching and top level research and scholarship. The goal is to ensure its next generation of graduates is equipped with the critical thinking and working skills to succeed in a world changing so quickly that it’s difficult to imagine the challenges and opportunities they will face in their varied careers and lives.
The new Maynooth curriculum will focus on preparing students to adapt to that rapidly changing world:

“This is a transformative development in Irish university education. We have completely re-imagined our undergraduate learning experience to develop a radically different Maynooth model of undergraduate education which is distinctive and challenging. Building on our strengths, we are adapting what we teach and how we teach to ensure our students graduate with the skills and qualities they need to thrive in a world where change is a given and adaptability is essential,” said Maynooth University President, Professor Philip Nolan.

The new curriculum model features greatly increased flexibility, giving students the ability to specialise immediately or explore options in first year and specialise later. The University also is making it easier for students to combine subjects across the arts and sciences; broaden their perspective by taking a 10-credit elective stream, a short course outside of their core subject(s); pursue both major and minor subjects within an honours degree; or study a modern language alongside any degree. The revisions also include a greater emphasis on experiential learning, including expanded study abroad, work placement and volunteer opportunities.

The new curriculum, which will be phased in between 2015 and 2017, will be partially facilitated by a significantly reduced number of entry routes—from 50 to approximately 20. These broader entry routes will greatly simplify the CAO process for students, while giving them more time to make the best decisions for the future.

Commenting on the new curriculum, Minister for Education Jan O’Sullivan TD said: “Ireland has a very strong reputation internationally for the quality of our graduates and our third level education. However, the modern world requires constant innovation to ensure we continue to protect and enhance our global standing and Maynooth’s is a bold move that addresses learning and development, student welfare and employer needs. In prioritising critical thought and analytical skills the academic team at Maynooth have rightly identified a major new focus for learning.”

President of the Institute of Guidance Counsellors Betty McLaughlin welcomed the announcement and said the broader entry routes at Maynooth University would reduce some of the stress on Irish students and families. “A huge fallacy that has been allowed to perpetuate in Ireland is that higher points courses are in some way more prestigious.  This is largely nonsense and has heaped unnecessary strain on young people for generations. At Maynooth students will now have access to a world of top-class degree opportunities with a fair, simplified entry route. All guidance counsellors nationwide enthusiastically support this and would urge all other universities to follow suit.”

Components of the new curriculum include:

Professor Philip Nolan continued, “It is hard to imagine what the world will be like towards the end of the present century, but we believe our role as a modern university is to prepare graduates for a future replete with unknown opportunities and challenges. By re-envisioning what the best university experience today should look like, we have focused on a comprehensive set of reforms designed to empower students to think clearly and critically, to adopt a broad perspective, to adapt to new situations, and ultimately to think about solutions to the world’s most pressing problems in a different way.”

Ben Finnegan, President of the Maynooth University Students’ Union said: “There is no doubt the new University curriculum will be of huge benefit to current and future Maynooth students, whether it be the increased flexibility and language options or more opportunities for study abroad, work placement and other ways to stand out to employers after they graduate. The Maynooth experience is already an amazing one for students from all over Ireland and even the world. The new curriculum will simply allow students to take better advantage of all that Maynooth has to offer.”

IBEC head of education policy, Tony Donohoe, also welcomed the new curriculum changes, saying industry would benefit from the approach to third level that Maynooth University is taking. “Quality graduates are important for Ireland’s competitiveness, our ability to attract top class foreign investment and the development of strong indigenous companies. Business wants young people who can be leaders, self-starters, display flexibility of thought and the ability to work in teams. Maynooth’s new curriculum will help deliver in these vital areas and is an important contribution to the national offering.”

The University has been developing the new curriculum over the past two years, with input from staff and students across the University, external advisory groups representing employers and civic organizations, as well as guidance counsellors, teachers, parents and others. 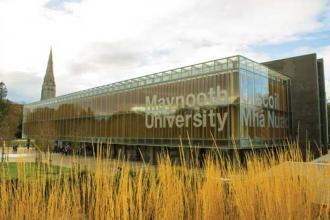