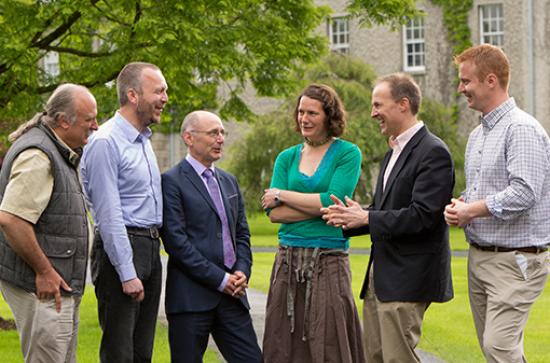 Recently uncovered weather records, dating back to the beginning of the 19th century, reveal that, historically, Ireland is remarkably prone to drought. According to Dr Conor Murphy, Maynooth University Department of Geography, the records show that the last 40 years have been unusual due to the absence of persistent drought events, which have occurred frequently over the last two centuries. Dr Murphy discussed the recently uncovered records in an opening keynote at the 9th ACRE Workshop and Historical Weather and Climate Data Forum at Maynooth University today.

The historical records demonstrate that Ireland was subject to persistent multi-season drought episodes in the 1800s, 1820s, 1850s, 1880s and, in the twentieth century, in the 1920s, 1930s, 1950s and 1970s.  The team at Maynooth is currently working on a detailed drought catalogue for Ireland stretching right back to the mid-1700s to map the spatial extent of droughts and trace their impacts using a range of documentary sources, including newspaper archives.

Researchers at Maynooth University, in collaboration with Met Éireann and international partners, have been undertaking to rescue climate data and make use of documentary records to deepen understanding of how the Irish, European, and global climate has varied over the last 160 years and beyond.  Over the last two years their research has seen the construction of long records for storminess (1871 to date), rainfall (1850 to date), flooding (1871 to date) and now droughts for the island of Ireland.

Understanding long-term historical climate is critical for informing current and future policy-making surrounding water resource management, flooding and agriculture.  Given that long drought events have happened with regularity in the past, there is a high likelihood that they will occur again in future.

In 1893 Dublin experienced a drought and water crisis when the Vartry supply failed to meet demands.  A key question that arises is how would contemporary Dublin cope if climate history were to repeat itself?  With the current water supply system operating so close to capacity a mature approach to planning would be to explore how current systems might fail or succeed in coping with the types of multi-season drought events this research has revealed to have occurred in the past.

As Dr Murphy observed: “When it comes to planning around extreme weather conditions, to predict the future you must understand the past.  Last winter saw significant flooding which caused severe damage to homes and businesses across the country.  We have recently derived continuous records of storminess and flooding dating back to 1871, and what is very significant is, although we are in a notable flood rich period, it is not unprecedented since the records began.”

Assembling high quality long term records of key climate variables is a critical but often laborious task. It is also an essential activity if we are to have the robust evidence basis from which to make smart, climate ready decisions.  Digitisation is key to making records available to researchers; however, the vast majority of records prior to the 1940s have yet to be processed.  Prior to 1880 in Ireland, meteorologists were not a unified professional body but a disparate group of amateur “gentlemen” scientists.  With weather instrumentation becoming widely available in the mid-nineteenth century, many amateur meteorologists began keeping the detailed ledgers that have proven to be treasure troves for modern climate scientists.

Speaking at the conference, Séamus Walsh, Head of Climatology and Observations at Met Éireann, said: “Looking at their records, it is clear that these amateur scientists took incredible pride in their work; however, they could not have known just how valuable their data would be to us today.  You can compare it to a map – to know where you are going you need to know where you are.  These long records are vital to help place recent extreme events in context, and allow us to track emerging climate change signals.  Making the data contained in these records available to all climate researchers through digitisation should be considered a matter of urgency and we need additional resources to make this happen.”

Commenting on the papers, conference organiser Professor Peter Thorne, Maynooth University Department of Geography, said: “The huge amount of data which has not been digitised represents the great ‘known unknowns’ in climatology.  Rescuing data from the archives, pulling together documentary sources, and making this data available to researchers will allow us to better understand the global, regional and national aspects of the climate system, refine our models for the future, and ensure that we become more resilient to both natural climate variability and human caused climate change.”