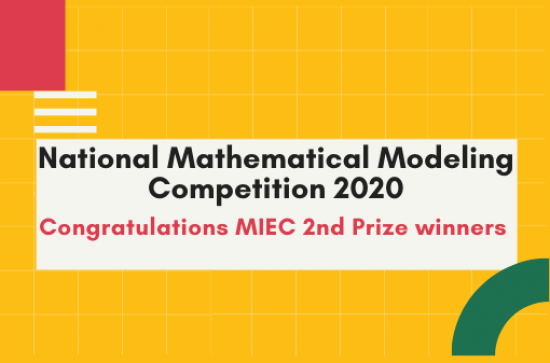 The National Mathematical Modeling Competition 2020 results were announced recently, with prizes won by MIEC students in the Fujian Province division at this annual contest for undergraduates.

The following MIEC teams received the 2nd Prize in recognition of their achievement in the competition:
The team of Zongtan Li, Zhichen Wei and Longrui Lan, from 2nd year Robotics & Intelligent Devices.
The team of Xi Wei, 2nd Year Multimedia, Mobile & Web Development and Yiyang Xuzeng, 2nd Year Robotics & Intelligent Devices.
The National Mathematical Modeling Competition for College Students was founded in 1992. It is a scientific and technological innovation activity for college students under the guidance of the Higher Education Department of the Ministry of Education and sponsored by the Chinese Society of Industrial and Applied Mathematics (CSIAM). In 2020, 130,000 students from 1,470 institutions across China, the United States, Britain, Malaysia and other countries participated in the contest.

Well done to the teams that successfully took part and gained valuable experience in mathematical and software modeling.