Fintan O’Toole on his new book, "Heroic Failure: Brexit and the Politics of Pain" 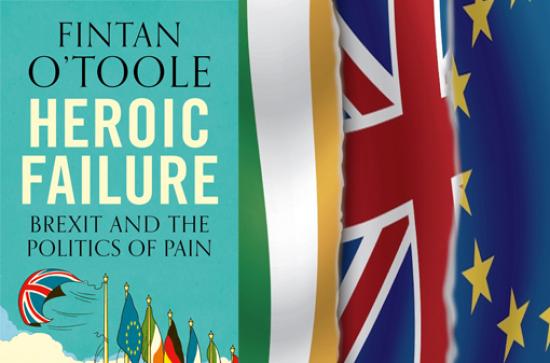 This event will see John O’Brennan, Director of the Centre in conversation with Fintan O’ Toole (The Irish Times) on Fintan’s new book, Heroic Failure: Brexit and the Politics of Pain. The book deals with the Brexit referendum, the chaos it unleashed in British politics and the challenges posed to the island of Ireland by a ‘No Deal Brexit’. In particular the book examines how a country that once had colonies is redefining itself as an oppressed nation requiring liberation; the dreams of revolutionary deregulation and privatisation that drive Arron Banks, Nigel Farage and Jacob Rees-Mogg; and the silent rise of English nationalism, the force that dare not speak its name. He also discusses the fatal attraction of heroic failure, once a self-deprecating cult in a hugely successful empire that could well afford the occasional disaster: the Charge of the Light Brigade, or Franklin lost in the Arctic. Now failure is no longer heroic – it is just failure, and its terrible costs will be paid by the most vulnerable of Brexit's supporters, and by those who may suffer the consequences of a hard border in Ireland and the breakdown of a fragile peace.

Workshop - Central and Eastern Europe: Past, Present and Future

The second annual workshop “Central and Eastern Europe: Past, Present and Future” aims to bring together research students and early career scholars in Ireland working on Russian, Central, and Eastern European topics in any discipline.