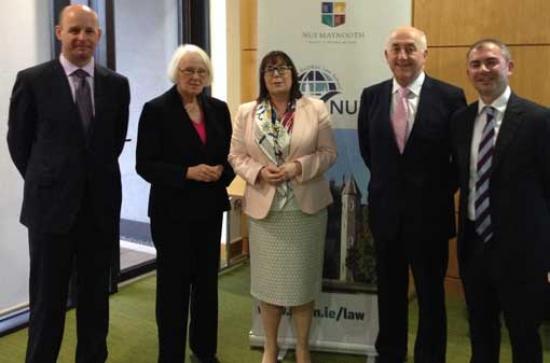 A significant imbalance in bargaining power exists between employers and employees, an event at Maynooth University Department of Law heard tonight.

Addressing this imbalance as part of the ‘Regulating for Decent Work – Combating Unfair Terms in Employment Contracts’ lecture, Esther Lynch, Legal and Legislative Officer at the Irish Congress of Trade Unions and Honorary Senior lecturer-in-Law at Maynooth University Department of Law, argued that without a trade union, employment contracts are too often written by employers on terms primarily to their advantage and offered on a ‘take it or leave it’ basis.

Lynch sought to propose new solutions to these serious issues in employment and labour law, addressing key challenges relating to the prevalence of unfair terms of employment contracts, and proposing new measures to reinforce legal safeguards preventing these abuses.

Amongst the assumptions challenged by Lynch is the legal view that employees are an equal party to the employment contract.  The lecture also addressed the phenomenon of zero-hours type contracts.  Current legislation only requires the employer to provide the employee with information about ‘any terms and conditions relating to hours of work’.  There is no requirement for employers to set out normal working hours leaving employees at the mercy of their supervisor as to first, the number of hours they work and secondly, the days on which they will be required to work.  This lack of certainty and transparency leaves employees vulnerable and denies them their rights as outlined by the International Labour Organization (ILO).

Speaking on this subject, Esther Lynch said: “there are many ways to think about the role of employment law.  Unfortunately the predominant narrative today is one of deregulation, based on the assumption that employment legislation is an undesirable and ineffective distortion of the market, and one that is incompatible with economic growth.

“The growing phenomenon of zero-hour contracts is clearly weighted against the employee.  In order to tackle this I have identified a number of measures to reinforce legal safeguards.  These include the provision of a written statement of normal working hours by employers and increasing the period of ‘compensated time’ so that employees are compensated for half of unworked time as opposed to the existing rate of just one quarter.  Other safeguards should include a limit on the proportion of a workforce that can be employed on a zero hour contract and a requirement for such employers to be able to demonstrate their unique need for zero-hours type practices.  These are amongst a number of measures urgently required in order to rebalance the legal relationship between employers and employees.”

The lecture took place in the Phoenix Building on Maynooth University ’s North Campus and was attended by various representatives from the legal profession and members of the business community.