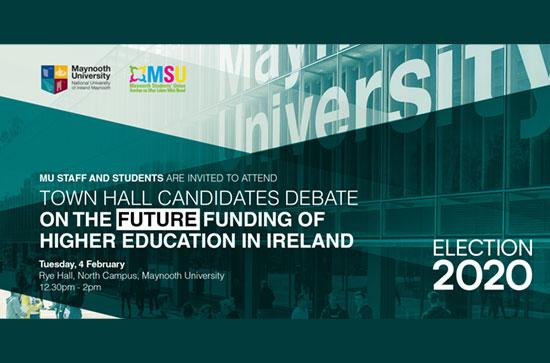 For the first time the representative bodies for the public higher education system – institutions and students - have come together under a single cause. The IUA, THEA and the USI - representative bodies for universities, institutes of technology and students - have come together to make the case for investment in higher education by the next Government. In the lead up to the election, Maynooth University is campaigning for investment in third level education.

Funding to third level institutions is now 40% less than it was a decade ago.  Every year, Ireland is losing ground against international competitors and the crisis in funding is compromising the quality of the higher education system and the student experience. This is directly impacting the more than 13,000 students currently enrolled at Maynooth University.

Maynooth University will host a town-hall on the future of Irish higher education and research funding on Tuesday, 4 February, 2020 at 12:30pm to which staff and students will be invited to attend.
The IUA, THEA and USI have begun a series of meetings with education spokespersons of all the major parties followed by social and online advertising to encourage staff, students and parents to ask their candidate to prioritise funding higher education in this general election.

To make up the funding shortfall, the representative bodies are proposing a two-part solution for the next three years until a longer-term funding model is agreed by the political system.

Part one involves a commitment from the next government to increase core exchequer funding to third-level by at least €100 million per year over each of the next three years.

Commenting on the situation, Professor Philip Nolan, President of Maynooth University, stated: “If we delay the implementation of the Cassells Report further, there is a real risk that the quality of our higher education system, already showing signs of strain as represented by a fall in international rankings, will be seriously damaged. If we allow that to happen, it could take years, even decades, to recover the lost ground.”

Katie Deegan, President of Maynooth Students’ Union, added, “Students across the country are feeling the effects of the lack of higher education funding. The struggle of coping with the rising cost of attending third-level education is amounting to an increase in student homelessness, rising debt, and mental health and well-being issues. Students in Ireland are the country’s future workforce and they deserve adequate investment to enable them to succeed.”