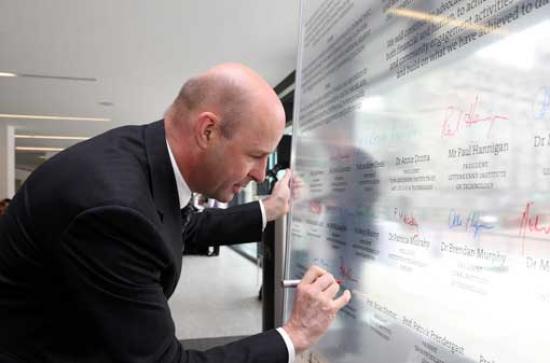 At a landmark event in Dublin Castle 20 Presidents of Higher Education Institutions came together as leaders of higher education in Ireland, to publicly sign up to the 10 point Campus Engage Charter on Civic and Community Engagement. Under the charter the presidents underscore their commitment to the civic and community engagement role and responsibilities of their institutions.

Launching the Charter, Minister for Education and Skills, Mr. Ruairi Quinn T.D said, “Today is an important recognition of commitment by Ireland’s higher education institutions to build on what has been achieved to date and place Ireland at the fore internationally in terms of promoting civic and community engagement by higher education.  The importance of ‘engagement’ is recognised in the National Strategy for Higher Education to 2030, and in the HEA’s performance framework, which both ask higher education institutions to engage openly with their community and wider society and for this to infuse every aspect of their mission.   I congratulate all involved in the realisation of the Charter, and specifically to the Presidents for their commitment. “

The launch of an Irish Charter for Civic and Community Engagement builds on the pioneering actions taken by other countries including Australia, UK and the US, who have signed up to similar agreements at national level to support and strengthen the civic role and responsibilities of higher education.

The Charter was developed by Campus Engage, a HEA funded, national initiative with representation from 17 HEIs, IOTI and the IUA. Its role is to promote innovative teaching, learning and other activities in the area of civic and community engagement.

In today’s times of economic uncertainly, and a policy context focused on developing our “knowledge society” there has been considerable emphasis on the contribution of Higher Education Institutions to economic recovery. Campuses across the country are building capacity and activating ‘bottom up’ student and staff-led initiatives such as community- based learning, community-based research and volunteering, to tackle the  skills deficit, contributing community-based research to inform public policy, engaging in political debate and providing evidenced-informed media debate on matters of public policy and public concern.

Closing the launch Dr. Patrick Prendergast, Provost of Trinity College Dublin and Chair of the Irish Universities Association (IUA) said, “Civic engagement benefits both students and communities. Students get transferrable, ‘work-ready’ skills through accredited learning realised in volunteering, and community-based research and learning. These activities improve students’ capacity for problem-solving and critical thinking. Communities are enhanced by students’ energy and engagement with the public good.”