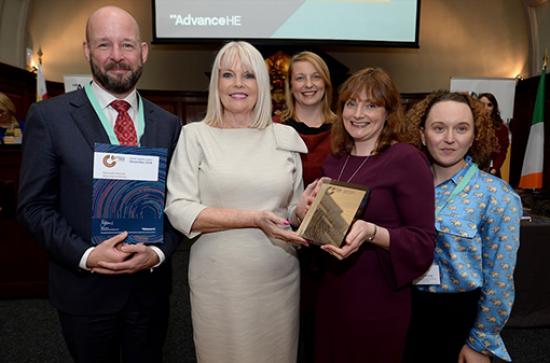 Two departments at Maynooth University, Biology and Geography, received Athena SWAN Bronze Department Awards at a ceremony hosted by the Royal College of Surgeons. The awards were presented to each department by the Minister of State for Higher Education, Mary Mitchell O’Connor TD.

In order to achieve Athena SWAN accreditation, institutions and departments in Higher Education Institutions are required to perform a critical self-reflection and analysis to identify both good practice and problem areas in relation to gender equality for staff and students.

Awarded by Advance HE, the cornerstone of the application is a 4-year action plan that addresses challenges particular to the department and discipline.

Vice President for Equality and Diversity, Dr Gemma Irvine, stated: “I wish to congratulate the departments of Biology and Geography whose hard work is represented in the achievement of these awards. Their action plans are advancing gender and intersectional equality for their academic, research and administrative staff and students and also feed directly into Maynooth University’s institutional gender equality action plan.”

Maynooth University’s applications in Biology and Geography were prepared by self-assessment teams (SATs) that are representative of each department. They were assisted in this work by the University’s Equality and Diversity and HR teams.

The awards ceremony held at the Royal College of Surgeons in Ireland (RCSI) was attended by Professor Philip Nolan, President of Maynooth University, and the Director of Human Resources, Rosaleen McCarthy.

About Athena Swan:
The Athena SWAN Charter is based on ten key principles. By being part of Athena SWAN, institutions and departments are committing to a progressive charter; adopting these principles within their policies, practices, action plans and culture. The original Athena SWAN Charter was established in 2005 to encourage and recognise institutional commitment to advancing the careers of women in Science, Technology, Engineering, Maths and Medicine (STEMM) in both higher education and research. In 2015, the Charter was expanded to recognise work done in Arts, Humanities, Social Sciences, Business and Law; in professional, administrative and technical roles; in work that considers intersectionality; and efforts to support transgender and gender diverse staff and student populations.

In 2017, Maynooth University was the first HEI in Ireland to apply for, and achieve, an Athena SWAN Bronze Institution Award under the expanded charter, in recognition of its commitment to progressing gender and intersectional equality for staff and students.