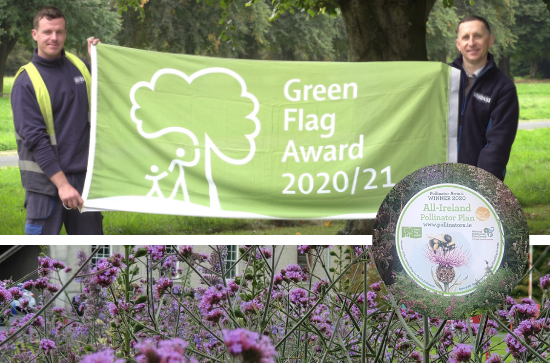 Jack O'Connell and Hennadiy Shynruk, Campus Services
Maynooth University campus has won the 2020 Green Flag Pollinator Project Awards, jointly run by An Taisce and the National Biodiversity Data Centre.
The Pollinator Project Award was established for Green Flag parks or gardens that have made an effort to support the local pollinating insect populations, or to promote their importance.
Maynooth campus retained its prestigious Green Flag accreditation for 2020 and was specially identified as “a site that features not only pollinator friendly planting and gardening, but also makes a great effort to educate the public and to promote these efforts through its website and social media.”
The 2020 Green Flag Awards were announced on Wednesday (16 September) for Ireland’s top parks and best gardens. The 2020 awards were available to public town parks, country parks, gardens, cemeteries, nature parks, and green spaces from across the whole country.
This year’s awards saw 84 Irish Parks and Gardens from across the Republic of Ireland receive their 2020 Green Flags. Among 15 countries whose parks met the standard this year, there were again more Green Flag Awards secured by Irish Parks and Gardens than by any country, other than the UK where the scheme originated in 1996.
Ireland achieved a significant increase in urban park Green Flag accreditations across Dublin, Galway, and Waterford Cities. There was a further expansion of the scheme to include new types of public green spaces. In Waterford, the country’s first Greenway was accredited, and in Cavan, a UNESCO Global Geopark become a Green Flag Award Site for the first time.
Dr Joe Larragy, Chair of Maynooth Green Campus, said: “This is a truly impressive achievement and is a credit to Stephen Seaman, the grounds supervisor and his remarkable team. This achievement further enhances the reputation of Maynooth campus as a top performer in the promotion of sustainability. In addition to the Green Parks and Pollinator award, the campus also holds the Green Campus Flag, awarded by An Taisce, in association with the Copenhagen-based Foundation for Environmental Education (FEE) for its work on the themes of Energy, Waste, Water, Travel & transport, Biodiversity and for its pioneering work on Climate Justice.”
The Minister of State for Community Development and Charities, Joe O’Brien TD, noted the importance of parks and green spaces. “This year we have appreciated the importance of the public parks and gardens within our communities probably more than at any other time. They have supported us all in maintaining a significant quality of life during restrictions, uncertainty, and upset. Without our public parks and gardens our lives would have been much further reduced and confined. I would like to take this opportunity to thank all of the hard work put in by park staff, and community volunteers, across the country.”
The Green Flag Award is the mark of a quality park or green space and is recognised throughout the world. Participating countries include: Australia, Belgium, Finland, Germany, Mexico, The Netherlands, New Zealand, Portugal, Republic of Ireland, Spain, Sweden, Turkey, United Arab Emirates, United Kingdom, and the United States of America.
Back to top
Back to top