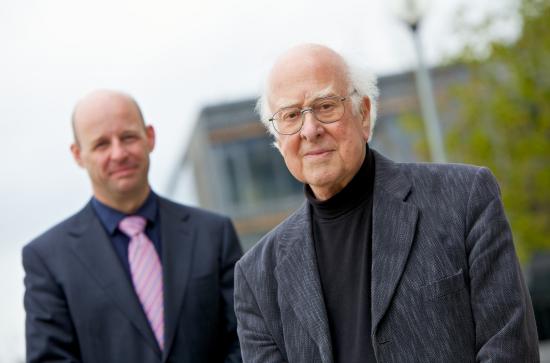 Maynooth University today congratulated Peter Higgs and François Englert on their Nobel Prize in Physics, which was awarded today "for the theoretical discovery of a mechanism that contributes to our understanding of the origin of mass of subatomic particles, and which recently was confirmed through the discovery of the predicted fundamental particle, by the ATLAS and CMS experiments at CERN's Large Hadron Collider".

Earlier this year Peter Higgs addressed more than 400 people at Maynooth University in a fascinating presentation about the Higgs Boson and its discovery. Higgs predicted the existence of this particle in 1964, and its discovery at CERN last year provided the final piece of experimental confirmation for our theory of the fundamental constituents of matter, known as the "Standard Model".

The hunt for the Higgs particle has long been one of the top priorities for particle physics. The Higgs is associated with a mechanism proposed in the mid-1960s to explain why one of nature's fundamental forces has a very short range while a similar force has infinite range. The forces in question are the electromagnetic force, which brings light to us from the stars, carries electricity around our homes, and gives structure to the atoms and molecules from which we are all made, and the weak force, which drives the energy generating processes of the stars.

Speaking today, Professor Philip Nolan, President, Maynooth University said: “We were privileged last year to welcome Peter Higgs to address us at Maynooth University and we were delighted to hear the news today of his and François Englert’s success. The discovery of the Higgs Boson was one of the most significant developments in physics for many years and it is heartening to see it acknowledged in such a monumental way.”