Launch of 'Women and the Irish Revolution' edited by Linda Connolly

Launch of 'Women and the Irish Revolution' edited by Linda Connolly 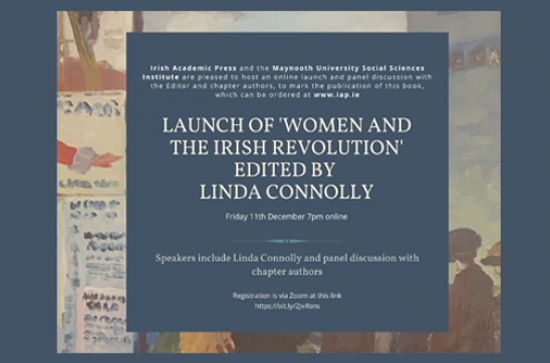 Irish Academic Press and the Maynooth University Social Sciences Institute are pleased to host an online launch and panel discussion with the Editor and chapter authors, to mark the publication of this book, which can be ordered at www.iap.ie

The narrative of the Irish revolution as a chronology of great men and male militarism, with women presumed to have either played a subsidiary role or no role at all, requires reconsideration. Women and feminists were extremely active in Irish revolutionary causes from 1912 onwards, but ultimately it was the men as revolutionary ‘leaders’ who took all the power, and indeed all the credit, after independence. Women from different backgrounds were activists in significant numbers and women across Ireland were profoundly impacted by the overall violence and tumult of the era, but they were then relegated to the private sphere, with the memory of their vital political and military role in the revolution forgotten and erased.

Women and the Irish Revolution examines diverse aspects of women’s experiences in the revolution after the Easter Rising. The complex role of women as activists, the detrimental impact of violence and social and political divisions on women, the role of women in the foundation of the new State, and dynamics of remembrance and forgetting are explored in detail by leading scholars in sociology, history, politics, and literary studies. Important and timely, and featuring previously unpublished material, this book will prompt essential new public conversations on the experiences of women in the Irish revolution.

Registration for this event is via zoom - https://us02web.zoom.us/webinar/register/WN_oMKvWCDlR-OfNeFnp-k3Sg

Contents of the Book:

Nationalism and Feminism: The Complex Relationship between the Suffragist and Independence Movements in Ireland ~ Louise Ryan

The Homefront as Battlefront: Women, Violence and the Domestic Space during War in Ireland, 1919–1921 ~ Mary McAuliffe

‘When we’ve licked the wounds of history’: Literary Representations of Women’s Experiences of the War of Independence and Civil War ~ Ailbhe McDaid

Commemorating the Irish Revolution: Disremembering and Remembering the Women and Children of the Tuam Mother and Baby Home ~ Sarah-Anne Buckley and John Cunningham

About the Editor: Professor Linda Connolly is the Director of the Social Sciences Institute at Maynooth University. She has published extensively in sociology and Irish studies, including the following books: The Irish Women’s Movement: From Revolution to Devolution (2003), Documenting Irish Feminisms: The Second Wave (with Tina O’Toole, 2005), Social Movements and Ireland (edited with Niamh Hourigan, 2006) and The ‘Irish’ Family (2015).