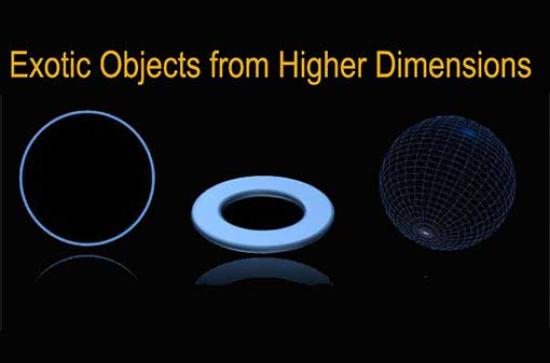 Q  Research and scholarship in Mathematics is often difficult to comprehend, even for other scientists and engineers, David, how can we understand your work on geometry?

Let’s start by considering  the question, “When is a sphere not a sphere?” This might sound like the first line of a joke, but interpreted in an appropriate mathematical context it can be a question of surprising depth and complexity.

Consider a standard balloon. Is this a sphere? The answer depends on the mathematical setting in which the word ‘sphere’ is to be understood.  The balloon will be more egg-shaped than round, although with a little squashing we could make it round. (This is easier said than done, but in theory at least the flexibility of the balloon's material makes this possible.) From the point of view of topology - an important sub-field of mathematics - the balloon is indeed a sphere. Topology is blind to the kind of nice deformations that we employed to make our balloon round: it could be loosely described as the science of phenomena which remain the same under such deformations.

Given that some aspects of the balloon’s shape remain the same under the deformation - the topological aspects - it is equally clear that other features change. ‘Geometry’ is a collective term which encompasses the features altered by deformation.

To give a different example, consider a doughnut. The surface of the doughnut is a torus, and mathematically we would describe the whole doughnut as a ‘solid torus’. The torus has some obvious topological properties, most notably the hole in the middle: if you deform the torus it will retain its hole, even though the geometry changes. However if we were to take a bite clean though a solid torus we would be left with an object which topologically is identical to a solid cylinder, and which no longer has a hole in the middle. The destructive (to the doughnut) action of taking a bite, as opposed to merely deforming the object, has resulted in a topological change.

Based on our experiences at school, the word ‘geometry’ is for most people synonymous with lines, circles, angles and triangles. This is specifically plane geometry, which was well-known to the ancient Greeks. However, even in simple familiar situations, there is much more to geometry than this.

Q…but does this have any practical application?
Consider the very practical problem of travelling from Dublin to New York. What is the shortest route? This, of course, is a very important question if you are running an airline. Popular wisdom says the shortest distance between two points is a straight line. However in this case, a straight line would take you through the Earth’s crust - not a practical travel option! A second guess might be to follow the route of a straight line drawn between the two cities on a map of the world. Unfortunately this simple answer is again wrong, and by quite a long way. The basic issue here is that the surface of the Earth is not flat, and so we need a more general version of geometry in order to be able to answer this kind of question.

In general,  geometry deals with concepts such a distances, angles, areas and volumes, and (crucially for the above example) curvature. It also deals with many other phenomena which, though important in a diverse range of situations, do not resonate as strongly with everyday experience.

The topology and geometry of surfaces (that is, objects such as the sphere and torus) have been more or less understood for a long time. Contemporary mathematicians working in geometry tend to study higher dimensional objects (called manifolds), which, although outside our direct experience, arise naturally both in mathematical and in other contexts such as science, engineering and finance. In order to appreciate how such high dimensional objects can be ‘natural’, it is first necessary to look at the concept of dimension itself. 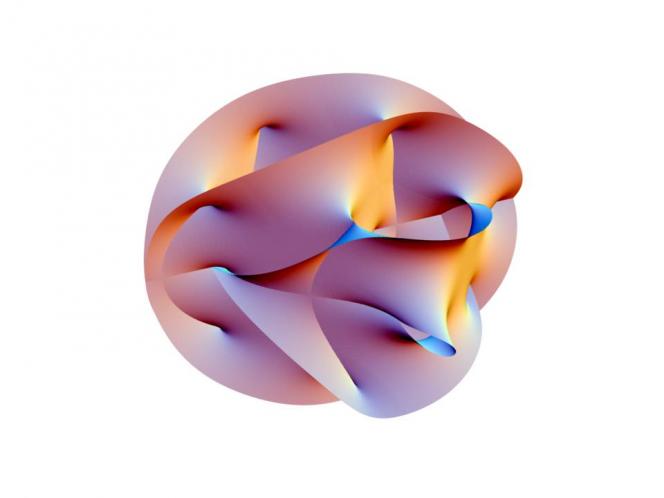 A representation of a Calabi Yau manifold, a higher dimensional object.  Image details

Q. “Dimensions?   I have heard the word used but I really don’t know what that means…
In mathematics, the dimension of a mathematical object refers to the minimum number of quantities (‘parameters’ to use the mathematical term) which one needs to completely describe that object. For example, to specify a point on a line it suffices to give a single number (for example the distance from some reference point on the line). Thus a line is one-dimensional. A torus, in contrast, is two-dimensional. We can specify a point on the torus by giving a pair of numbers: one describing distance around the central hole, and the other describing distance around the ‘inner’ hole (the one you put your teeth through if the torus was the surface of a doughnut you were eating). In contrast, consider a complex mechanical or biological system. This might require a large number of parameters to describe all aspects of the system, thus in some abstract sense we can model the system as a high dimensional space. In particular, we might try and describe the operation of the system using a collection of equations, each of which details a relationship between some of the parameters. The solution set to this collection of equations will in many cases be a high-dimensional manifold. Analysing the topology and geometry of such an object might then provide sophisticated insights into the operation of the system which may be invisible from a more direct perspective.

Q. So can I envision a higher dimensional object?
To give a concrete example of a high-dimensional object, we return again to spheres. A circle (which can be thought of as a one-dimensional sphere) and the usual two-dimensional sphere can both be described as the set of points satisfying certain equations. For those familiar with these equations, it is easy to see how they can be generalized to include more parameters, and in this way it is not difficult to see that there is a sphere defined naturally in each dimension. Each sphere has an equator (which itself is a sphere of dimension one lower), and in our imagination we can cut along the equator to produce two hemispheres. This process is clearly reversible: we can glue the two hemispheres back together to recover the original sphere.

In high dimensions, however, strange things can happen: phenomena not present in lower dimensions can unexpectedly appear. In the late 1950s it was discovered that in dimension seven, there is a way of gluing the two halves back together to get something fundamentally different from the original sphere. So this object is both ‘sphere-like’ in so far as it is constructed from two hemispheres by gluing them along their edges, but also quite different. The name given to this object was ‘exotic sphere’. Subsequently many more exotic spheres were discovered both in dimension seven and in higher dimensions. Fifty years later, we know much about exotic spheres - for example we know how many there are in each dimension - but many details still elude us - for example we have no idea how to construct at least half of them. (Notice that we can sometimes prove something exists without knowing explicitly what it is!) In dimensions less than seven it is now known that the exotic sphere phenomenon cannot occur, except possibly in dimension four where the situation is very mysterious. 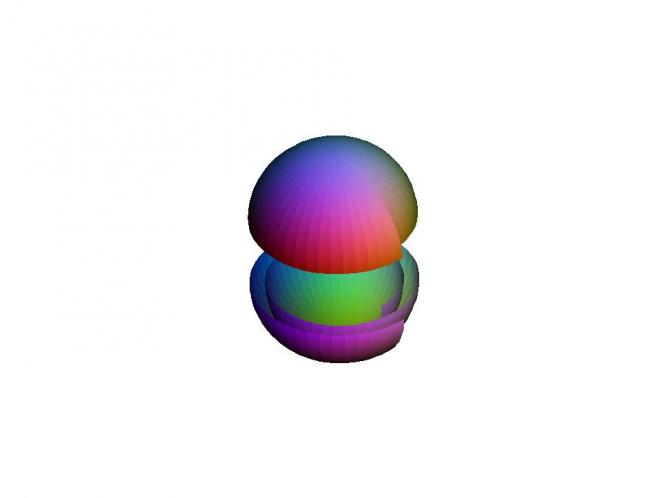 A sphere folded around itself.  Image details

Q. So what is the current state of scholarship in this field?
The most well-known recent contribution to this subject was provided by the great Russian mathematician Grigori Perelman, who, in 2003 announced a proof of the ‘Poincaré Conjecture’, a famous question which had remained open for nearly one hundred years. The Poincaré Conjecture essentially asserts that there are no exotic spheres in dimension three. The resolution of the Poincaré Conjecture carried a prize of one million dollars, put up by the Clay Mathematics Institute in America. Famously, Perelman turned this prize down. Moreover he also declined the Fields Medal - the mathematical equivalent of the Nobel Prize - which he was offered for his work.

A curious aspect of Perelman's work is that he solved a topological problem using geometry. (Somewhat earlier, Andrew Wiles had solved the even more famous ‘Fermat's Last Theorem’ - a problem in number theory - using geometry, albeit geometry of a different flavour.) The fact that the Poincaré Conjecture was equivalent to a problem in geometry had been known for some time prior to Perelman. This followed from the work of American mathematician Richard Hamilton in 1982. The geometry in question involves a particular notion of curvature called the ‘Ricci curvature’. The Ricci curvature arises naturally in many contexts within the world of mathematics, and also in physics, where it appears for example in the theory of relativity. Hamilton showed the Poincaré Conjecture was equivalent to asserting that every member of a certain general family of three-dimensional manifolds can display positive Ricci curvature. Perelman's achievement was to show that these manifolds do indeed admit such curvature.

In my current work with Dr. Diarmuid Crowley of the University of Aberdeen, I am exploring the existence of positive Ricci curvature on a very large family of objects called ‘highly connected manifolds’. This family includes all exotic spheres, and so could be viewed as part of a general scheme which includes Perelman's resolution of the Poincaré Conjecture. To date we have proved a theorem which describes the situation for manifolds in dimensions of the form 4n+3, that is dimensions 7, 11, 15, 19, 23 and so on. However there is still much work to do in order for us to uncover the full geometric picture for these objects.