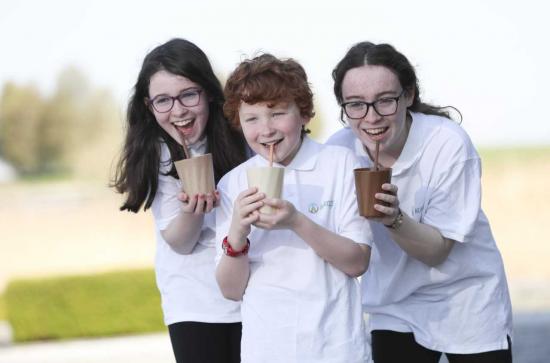 The Froebel Department, Maynooth University is a partner in the *AgroCycle Project. The project takes a holistic approach to understanding and addressing how to make best use of the full range of waste streams associated with the agri-food industry. It is delivering the AgroCycle Protocol, a blueprint for achieving sustainable agri-food waste valorisation. The resultant AgroCycle Protocol will deliver sustainable waste valorisation pathways addressing the European policy target of reducing food waste by 50% by 2030, as well contributing to the wave of change that is occurring in China in relation to sustainability. This corresponds with the UN 2030 Sustainable Development Goals.

The Froebel Department, Maynooth University led by Dr Máire Nic an Bhaird have worked with the AgroCycle scientists and have produced AgroCycle Kids. AgroCyle Kids is delivering the message to the children of Ireland, Europe and China about Sustainable development education, the circular economy, ‘agri-food waste’ and ‘waste valorisation’. The AgroCycle Kids Anna, Liam and Kate are seen in the photo with the edible straws that AgroCycle made from rice bran. ‘No more plastic’ is their motto! The free online resources available to educators, children and the wider community came first in the European ‘Think Biobased Challenge’ competition for their innovative, modern, fresh resources. http://agrocycle-platform.com
Maynooth University PhD student Laoise Ní Chléirigh has been disseminating the message of AgroCycle Kids to children in Ireland, Europe and China. ‘What is important about this project is that the children, the future generation, are being consulted and given a voice. Scientists and children are working together for the greater good. Children are empowered and have started sharing and discussing the AgroCycle Kids message, thus working for societal change and for a better future for them and their families. They are driving home the concept that ‘there is no away’’ Laoise Ní Chléirigh 29th March 2019. Phil Hogan, European Commissioner for Agriculture and Rural Development, praised Maynooth University’s foresight into including the children in this important conversation. Please listen to Phil Hogan’s video from Brussels delivered at the AgroCycle closing meeting in the Department of Agriculture, Food and the Marine, Backweston, Celbridge, Co. Kildare on Friday 29th March 2019.

* The AgroCycle Project is a ca. €8 million (ca. €7 million from the European Commission, ca. €1 million from the Government of The People’s Republic of China) Horizon 2020 research and innovation project addressing the recycling and valorisation of waste from the agri-food sector.

Education, Learning Environments and Professional Practice
Back to top
Back to top