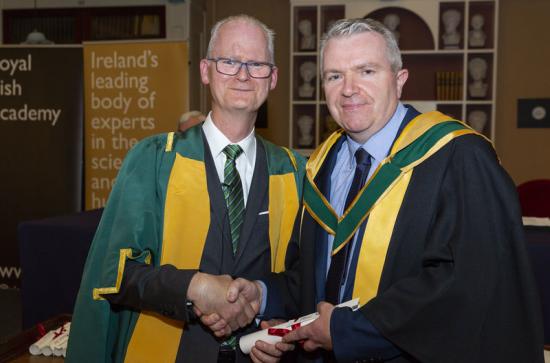 Maynooth University congratulates Professor Paul Moynagh on his admission as a member of the Royal Irish Academy (RIA), deemed to be highest academic honour in Ireland.
Prof Moynagh, who is Head of the Department of Biology and Director of the Human Health Research Institute at Maynooth University, is one of 27 new members of the RIA, and one of 10 new members admitted from the Sciences in 2019.

Prof Moynagh has published extensively in the area of immunology-related research. In 2009 he was awarded the NUI Centennial Prize for Academic Publishing in Medical and Health Sciences and he is the recipient of the 2014 Irish Area Section Biochemical Society (IASBS) Medal. He is a Science Foundation Ireland (SFI) Principal Investigator.  His research focuses on delineating the roles of Pellino proteins in immunity.

Welcoming the eminent scholars as new members, Professor Peter Kennedy, President of the Academy said: “These individuals have made exceptional contributions in their fields of endeavour. We are delighted to recognise their achievements.”

The RIA also plans to establish a young academy for Ireland’s top young researchers in the sciences and humanities. The young academy will provide a forum for Ireland’s early to mid-career researchers and scholars so that their voices are heard within the Academy and by national and international policy makers. It will join an international network of 45 National Young Academies that exist world-wide.

The Academy has been honouring Ireland’s leading contributors to the world of learning since its establishment in 1785.