Neuromod raises €5.5m to fund clinical trials for a device that targets Tinnitus

Neuromod raises €5.5m to fund clinical trials for a device that targets Tinnitus 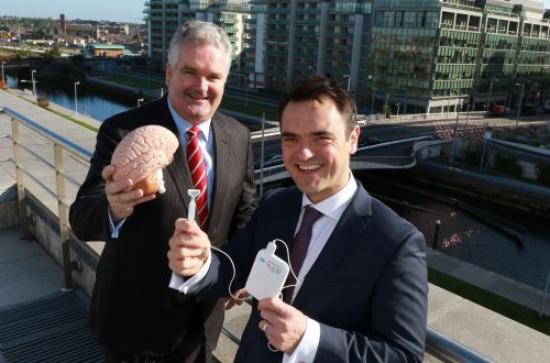 Irish company Neuromod has raised €5.5 million to fund clinical trials in the US for a device that targets millions of people suffering from chronic tinnitus.

Tinnitus, often described as a ringing or buzzing in the ears, affects as many and there are very limited treatment options currently available.

Neuromod, a company spun out of Maynooth University, has raised the money in its first institutional fundraising from lrish life sciences venture capital group Fountain Healthcare Partners. Until now, the company had raised around €2 million in a series of private investments, with support from Enterprise Ireland.

Tinnitus is caused when hair cells or nerve fibres in the inner ears are damaged. Recent scientific research argues that the phantom noise emanates from the brain trying to “compensate” by “turning up the volume”, as Jennifer Melcher of the Massachusetts Eye and Ear Infirmary put it in a recent piece on the condition in The Scientist Magazine.

StimulationNeuromod’s Mutebutton device uses stimulation through the ear via headphones and sensory stimulation with a pad that clips on to the tip of the tongue.The Mutebutton, which has been trailed successfully in 50 patients, has already been approved for sale in Europe and is available in the Irish market. However, the company has decided to prioritise regulatory approval in the key US market ahead of any broader commercialisation in Europe.

“As a small innovative venture capital -backed company, our intention is to focus our resources on strategic goals,” says Neuromod founder and chief executive Ross O’Neill,The company is targeting commercialisation internationally in 2018. Aside from US Trials, Mr O’Neill said the company will also use the funds raised to work on fine-tuning treatment dose and also to conduct more work in which subgroups of patients with tinnitus will respond more effectively to its therapy.

Tinnitus affects as many as one in five people. Existing drug therapies are relevant only for acute tinnitus addressed in the first 90 days. Thereafter, as the condition becomes chronic, other therapies are required. But, until recently, tinnitus has struggled to get research dollars. As of now, apart from Neuromod, there are only three companies investigating approaches to relieve chronic tinnitus.

Fountain Healthcare Partners managing partner Manus Rogan says the Neuromod deal is one of the first VC investments in the area of tinnitus. The company has already invested in another neuromodulation -based group, Mainstay Medical, which is targeting chronic lower back pain with an implantable device

“This represents an intersection of two hot areas which we as a firm have a keen interest in,” Said Dr Rogan.

He said a recently acquired US patent, alongside the CE mark for European commercialisation and strong results from its 50-patient trial makes Neuromod a strong investment candidate which now has the capital to move forward.