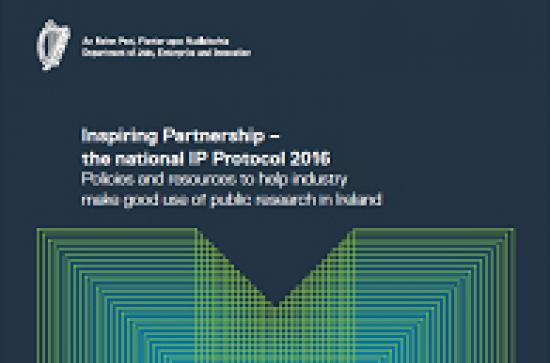 The National IP Protocol provides a framework for the way in which companies and research performing organisations can work together and how companies can benefit from access to new ideas, technology and inventions (intellectual property or “IP”).

Produced by Knowledge Transfer Ireland for the Department of Jobs, Enterprise and Innovation, the new Protocol is consistent with existing policy and introduces some practical additions to speed up negotiation between industry and research performing organisations.

Ireland already performs well within this space and is set to continue to do so. The number of companies working with research performing organisations in 2014 increased by 46% - a figure that is expected to continue to grow, not least with the advent of the new Protocol which further simplifies the processes involved. In addition, almost 2,000 new collaborative agreements were signed between industry and research organisations in 2014 and in the same year there was a 21% increase in the number of licences/options/assignments known collectively as LOAs.

Speaking at the launch, the Minister said “We want investment in public research to drive innovation and competitiveness in business, the public sector and to enable the creation of jobs. The IP Protocol 2016 sets out Government’s policies to encourage industry to benefit from publicly-funded research and describes the practical arrangements for this to happen. In producing the IP Protocol, Knowledge Transfer Ireland consulted extensively with representatives from industry and research organisations to ensure Government policy supports all enterprises engaging with research performing organisations in Ireland.”

Also speaking at the launch, Alison Campbell, Director of Knowledge Transfer Ireland said “In working with the Department to produce the IP Protocol, Knowledge Transfer Ireland sought to deliver a simpler and very practical guide for anyone engaging in the process of knowledge or technology transfer. We are very pleased that the IP Protocol 2016 and the associated resource guide does just that. In particular, the IP Protocol offers valuable support that will help increase the number of companies and research performing organisations working together and the number of businesses benefitting from innovation.”

1)    the policy document which sets out the framework underpinning research collaboration and access to intellectual property from state-funded research.
2)    the resource guide which provides an overview of the national IP management guidelines and links to a wealth of resources and template documents that support these guidelines. It also provides an overview of the knowledge transfer structures in Ireland and the kinds of agreements that can be used to formalise research-industry engagements.